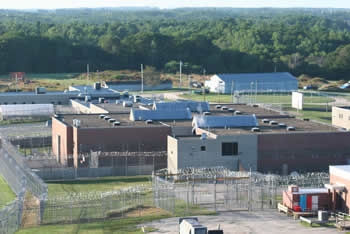 WINDHAM, Maine — Plans have started to develop a new prison facility in Windham. Maine Department of Corrections officials are currently working on a feasibility study that will assess the benefits of replacing the current Maine Correctional Center with a more efficient and updated facility. Although construction on the project wouldn’t begin for a few years, the feasibility study is due to Maine’s Legislature in the spring of 2014.
The study is surfacing after Gov. Paul LePage’s failed redesign proposal submitted a year ago. While the proposed plan for the new prison seems promising and holds many opportunities for the future of Maine corrections, there are many state government officials who are hesitant to welcome the plan with open arms. Many are turned off to the large scale of the project and the Department of Corrections’ request to borrow $100 million to cover the cost of construction for the project. The completion of the feasibility study will be an important step for the Department of Corrections to assess whether they will be able to move forward with the project.
The state’s budget cycle prevented the proposal from moving forward last year, resulting in the current plans for a feasibility study. The goal of the study is to gauge the current state of the Maine Correctional Center along with several other smaller prisons in Maine.
The main issue involves funding. Government officials hope the project will cost less than the estimated $100 million, and some would rather put the funds toward social programming such as human services, education and restoring other run-down buildings in the state. “The key to it, for me,” said State Sen. Gary Plummer, R-Windham,” is that we can operate with less staff per capita, and in the end, the entire facility would be run for less money or at least no more money than we are spending right now.”
Many of the prison facilities in Maine are outdated and long overdue for renovations, however. Most did not originate as prisons, having been converted from other facilities such as military barracks. While repurposing already constructed housing facilities certainly saves the state money in the beginning on the cost of construction, it ends up costing more since the facilities are not properly outfitted as prisons, according to Joseph Ponte, Department of Corrections Commissioner.
There are several benefits to the construction of a new prison complex, including the prospect of additional jobs for local workers and significant budget savings for the state, according to Scott Fish, director of special projects at the Maine Department of Corrections. Not only would new jobs be created during the construction process, but current prison employees from the existing correctional center and other smaller prisons would have the chance to transfer to the new Windham facility as positions open up. While fewer jobs will be available for prison staff at the new facility, it will help save the state a significant amount of money in its $23 million yearly budget. Staffing currently amounts to three quarters of the budget.
Another benefit to constructing a new prison is the prospect of including a new section designated for elderly inmates, inmates with mental illnesses, and female prisoners. Additional rehabilitation programs will also be incorporated, which will help low-risk inmates increase their job opportunities upon their release.
A significant portion of the projected plan for the new facility involves closing or reducing the operations at smaller Maine prisons, and moving the inmates housed there to the new Windham facility. Housing all inmates in one location would drastically reduce the operational cost from $102 per inmate per day to $62.
The new facility’s design is a key component factoring into the plan as well. An effective design will help reduce the cost of operation and help the facility run more smoothly. Much of the existing facility is comprised of one main structure with many additional elements added throughout the years, rendering it inefficient and expensive.
Fish also stated that the new facility would be designed to contain the officers and inmates in one space, rather than ineffectively spreading them throughout several buildings.
The project is expected to take a total of three to four years from the design phase to completion.