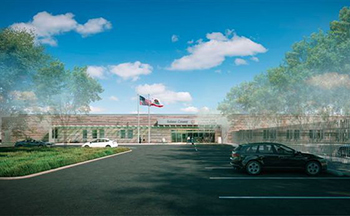 FAIRFIELD, Calif. — The new 127,800-square-foot Stanton Correctional Facility in Fairfield will debut in July, about two years after construction broke ground. The 362-bed maximum security adult detention facility is one of the first group of projects to be financed by the State AB 900 funding, which approved $1.2 billion in jail construction funding due to overcrowding and realignment issues.
San Francisco-based HOK Architects is serving as the architect, while El Dorado Hills, Calif.-based Roebbelen Contracting Inc. is serving as the general contractor. The project is designed to meet or exceed LEED Silver certification.
This facility stands adjacent to the existing 1970s-era Claybank Detention Facility but functions separately and stands alone. The existing facility will now be used for work release, weekender and other lower-security housing.
The new facility houses post-arraignment and pre-sentenced individuals and consists of podular housing units operated by a central control in a modified direct supervision model. The podular design uses modern electronic security to maximize staff effectiveness and efficiency. The new building includes support systems of laundry facilities, an administrative services area, and a secure vehicle sallyport with an intake and processing area as well as a large training room for county-wide use.

The main goal of the facility was to house more inmates and be able to offer programming to the inmates, said Rick Bruining, corrections project manager for Roebbelen Contracnting Inc. Upon completion, the goal is that staff, public and inmate safety will improve significantly, programs will be added, recidivism will be reduced, and the facility will be in compliance with critical regulations and standards.

One of the facility’s key design elements is the use of steel wall panel construction for the housing cells, intake cells and many of the detention portions of support and medical, Bruining said. Another is the Primecoat coating system used to coat the walls and ceilings in housing and intake, he added.

“Primecoat is a special epoxy coating system that is anti-microbial, extremely durable, and offers the end user a 10-year warranty,” Bruining said. “Another [design element] is the large amount of woven wire mesh. The mesh was incorporated into the design of the cell mezzanine walkways, an exterior 3,000-square-foot refuge area with mesh walkways leading to it, and a mesh vehicle sallyport.”

These intricate design elements, accompanied by the short construction time period, were the greatest challenges on the project, Bruining said.
The Stanton Correction Facility is named after a family that provided three former sheriff’s officers. The three Stantons who are being be honored by the name are the late Capt. Robert Stanton, who served the Sheriff’s Office from 1951 to 1984, the late Lt. William Stanton, who served from 1949 to 1979; and Sheriff Gary Stanton, who served from 1972 until his retirement in October 2012.
Funding for the project came in part from a state grant totaling $200 million awarded to seven counties to help them prepare for realignment. Solano County was awarded $65 million from the grant, covering the majority of the $89 million facility cost. The remaining $24 million came from a special fund that the county has set aside specifically for jail building.
With the existing Claybank facility, the addition of the new jail and the current downtown Fairfield facility, the county will be able to house 1,442 inmates. The new jail will also take some staffing personnel from the existing Claybank facility.