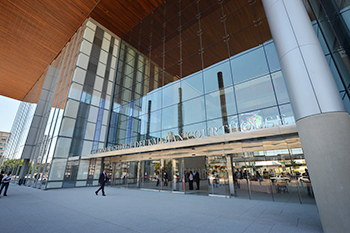 The project team consisted of Los Angeles-headquartered AECOM as the architect-engineer of record; Costa Mesa, Calif.-based Clark Design/Build of California as the design-builder; and locally based Long Beach Judicial Partners (LBJP) as the developer.

The project opened to the public on Sept. 9, 2013 ahead of schedule and under budget. It is the first major civic building in the U.S. delivered through PBI, a type of public-private partnership in which the developer makes a substantial equity investment and the public sector makes availability payments. The PBI arrangement made it possible to deliver the project with a quality design, despite the lack of public funds available for financing.

The $340 million project replaces a decrepit 55-year-old facility that was literally falling apart and had rat infestations to the point that a judge even named one that continued to visit his courtroom. These issues posed serious safety and operational issues that were addressed in the design of the new facility.

Henry Pittner, principal for AECOM, described the courthouse as looking almost like a museum, with its massive window-filled atrium, exterior courtyard and urban look, while still remaining functional.

“The five-story lobby space is a big draw as you walk in,” Pittner said. “The lobby itself connects the courts piece to the non-courts piece. The district attorney and public defender are in a building that’s connected to this large entry atrium space but they aren’t part of the courtroom core.”

In addition to the entry atrium, the second thing that draws visitors is how the atrium space is connected to an outdoor courtyard, providing a calming area to the public.

“The courtroom doors lead to the outside if you need a minute to gather yourself in a calming space,” Pittner said. “All of the public spaces look out into it, yet it’s secure. No one can throw contraband into it because of the distance the building is away from the street, and the fences keep people away from.”

The building was required to qualify for a LEED Silver designation, so it was built to be at least 17 percent more efficient than the mandatory California Title 24 energy performance requirements. As such, the building was designed to take best advantage of the southern exposure for light and winter heat in the office, and the curtain wall was designed to minimize heat gain in summer. The courtyard areas are then located in the cooler and shaded northern exposure.

Other sustainability highlights include the displacement of ventilation air distribution in the courtrooms, which not only provides energy efficiency, but also improves indoor air quality, thermal comfort and noise reduction. The project team also used an automated light harvesting system, which optimizes use of natural light to save energy without compromising occupant comfort levels. LED lighting fixtures reduce energy use and reduce operating costs.

While the design-build team received accolades for the design and construction of the building, it was also praised for the revitalization of the downtown Long Beach community. The new building is located within two city blocks that were once home to vacant lots and run-down buildings.

The project team also integrated themselves into the community during construction. For instance, they worked with the locally based Willmore City Heritage Association (WCHA) to help construct The Children’s Gateway Garden. They also mentored students from Chavez Elementary, located across the street from the jobsite.