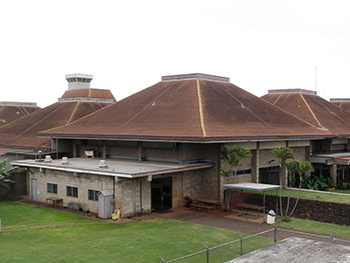 HONOLULU, Hawaii — After two inmates escaped from Hawaii’s Oahu Community Correctional Center (OCCC) in the span of a week, attention has been refocused on the state’s increasingly crowded correctional population.

On June 10, an inmate released on work furlough walked away from the program, while a medium-security inmate not involved in work release was able to flee the facility just six days later. The second inmate escaped from the OCCC’s Annex 1, a wooden medium security facility, through a restroom ceiling. The inmate, who had been in OCCC custody since June 4, then identified a weakness in the fence line to make his escape. The OCCC was placed on lockdown for several hours while administrators conducted their investigation, however neither inmate has been located.
According to the Hawaii Department of Public Safety, the Oahu Community Correctional Center is the largest jail facility in the State of Hawaii, and is situated on a 16-acre site in urban Honolulu. The 950-bed complex primarily houses pre-trial detainees and provides reintegration programming for male sentenced felons. Facilities on the OCCC site include the work furlough housing area and a concrete construction prison for higher security inmates.

The work furlough building was originally intended to house 80 lower security inmates. However, overcrowding has reportedly forced OCCC administrators to push the facility’s capacity to 120. According to Department of Public Safety Director Ted Sakai, just over 100 inmates were housed in the facility on the evening of the second escape, including some who had been identified as higher risk. Meanwhile inmates are often housed three to a one-person cell in the main prison, posing safety threats to both staff and inmates, and making it increasingly difficult to properly classify and separate the population.

Speaking with the Honolulu Star Advertiser, Sakai said the OCCC currently houses as many as 1,200 inmates, though it was constructed to accommodate just 600. This situation is reflected in correctional facilities across the state. According to the Department of Public Safety, despite chronic overcrowding, the department has not significantly expanded its capacity since 1987, and currently maintains approximately 3,000 beds. In response, Hawaii correctional officials issued a request for proposals in November 2013 looking for solutions that will alleviate overcrowding and accommodate future expansion while still allowing the state to maintain operations.

Correctional officials are now considering a variety of plans to address and decrease crowding across the state, including proposals to construct several new jails and prisons across four of Hawaii’s seven islands. These projects have an estimated cost of between $500 million and $1 billion, and a combined capacity of roughly 6,000.

This new construction would provide Hawaii with a necessary correctional bed surplus. The state currently houses several hundred inmates in the local Federal Detention Center at a cost of more than $100 per inmate per day, an arrangement that has been in place for more than a decade. Prison officials also have an agreement with a Corrections Corporation of America-run facility in Arizona to house some 1,500 inmates in that state. In the 2012-2013 fiscal year, the state reportedly paid CCA nearly $47 million for inmate housing.