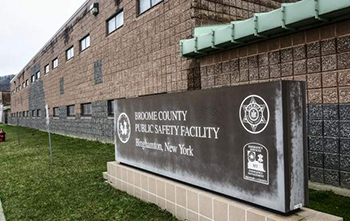 BINGHAMTON, N.Y. — Construction on a $6.8 million project at the Broome County jail facility in Binghamton kicked off earlier this month. The project will add a new medical pod and increase housing space at the currently 536-bed, direct supervision facility.

“The main goal of the renovation is to make use of existing ‘unused’ space in an effort to bring our facility into compliance with New York State Commission of Correction guidelines,” said Major Mark Smolinsky, with the Broome County Sheriffs Office.

The project includes repurposing the interior exercise space and converting it into a dorm-style multipurpose housing unit for 48 inmates, according to Smolinsky. It also includes the addition of a 16-bed medical unit, which would help the jail comply with the Commission of Correction’s requirement to separate male and female inmates in the medical unit. The facility currently has a 12-bed unit for both sexes, but the new pod would allow them to separate them. Construction crews will cut a hole in the wall in the current medical pod to expand and add the new one.

“Our need for expanded medical services, especially for the mentally ill inmates provided us with the unique ability to maximize space and staff supervision, keeping in mind the strict New York State regulations pertaining to different levels of supervision,” Smolinsky said.

One of the main challenges in the project involved convincing the county legislature to fund the project. “Our average daily population has continued to rise, as well as our average length of stay, thus driving our need for the expansion,” Smolinsky said.

Last year, a county-commissioned study by Rochester, N.Y.-based consulting firm LaBella Associates — which is also the architecture and engineering firm for the project — used state data to project the jail’s population would reach up to 710 by 2028. The extra housing space will help cut down on costs that the county has spent on housing inmates at other facilities. Broome County Sheriff David Harder told WBNG 12 Action News that the facility is at its most crowded point, costing the county almost $2 million in the past couple years.

In 2012, the jail was able to generate more than $1 million for the county. The facility uses double celling, which in the past helped eliminate the need to board out inmates and maintain state-ready and federal inmate revenues. The use of double bunking had always resulted in significant cost savings for taxpayers since its inception in 1999.

He added that the staff at the sheriffs office has worked closely with the architect to develop a plan that should meet the jail’s needs for the foreseeable future, while keeping costs and disruption’s at a minimum.

The site is currently be prepped by moving sod, laying down a stone base and setting up scaffolding, reported Fox 40.

The project should take about 16 months to complete.