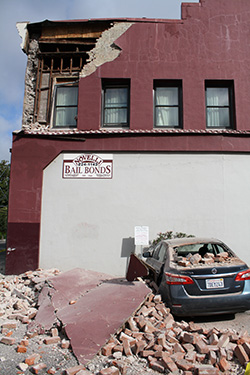 Speaking with a local CBS affiliate on May 18, Napa County Corrections Administrative Manager Brett Prebula explained that, while the jail appears stable from the outside, the building actually sustained significant internal damage during the 6.0 magnitude quake and will need to be entirely rebuilt. However, the adjoining Napa County Hall of Justice and Jail Facility complex built in 1989 — 14 years after the jail was completed — was not as heavily impacted and will not need further repairs.

Just days after the quake, the county’s Department of Corrections obtained a court order allowing the transfer of some of inmates from the impacted jail to nearby facilities. Dozens of male and female inmates were transferred to the Solano County Jail and the Fairfield County Jail, respectively. The transfer was deemed necessary for the ongoing safety of inmates and staff, according to a statement issued by the department. However, justice officials also report the transfer has put added strain on inmates’ families, who are forced to travel a greater distance for visits.

“The safety of our staff and inmates has always been and remains our top priority,” said Lenard Vare, director of corrections, in the statement. “Non-structural damage sustained from the earthquake has created safety concerns and requires the movement of inmates from certain areas of the facility in order for the county to properly assess necessary repairs.”

Within two weeks of the earthquake, the Napa County Department of Corrections announced that all inmate telephone communications, voicemail, video visitation and the canteed kiosk at been restored.

The Napa County Hall of Justice and Jail Facility was inspected thoroughly following the quake, and was deemed structurally sound. It was then “yellow tagged,” denoting that the damage sustained was generally superficial. Use of the building was restricted to correctional purposes only pending non-structural repairs, which were completed after the inmate transfer.

In an official statement two days after the quake, Vare assured the community that the jail was operating safely.

"The department continues to provide services that meet required standards for jail operations. Inmates are receiving meals, access to showers and medical and mental health services," Vare said. "The telephone system is in service and inmates are able to reach their loved ones. The safety of staff and inmates is the department’s top priority."

Despite the move, the department continues to accept new bookings and is working closely with officials at the Board of State and Community Corrections to ensure compliance with state regulations.

Inclement weather has forced the transfer of hundreds of inmates in recent years. A tornado that damaged multiple housing units, as well as perimeter fencing, at the Limestone Correctional Facility in Capshaw, Ala. in 2012 necessitated the redistribution of 200 inmates to nearby facilities. Later that same year nearly 80 inmates were transferred from a Dixon, Ill. prison to a maximum-security facility in Pontiac as the result of storm damage.