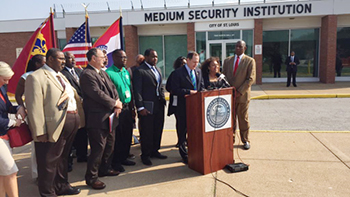 ST. LOUIS — St. Louis Mayor Francis Slay unveiled a pilot program on Sept. 8 that will help reform the city’s inmates. The program, From Prison to Prosperity, targets young adults in the city’s jail system by partnering the city’s correction division with St. Louis Agency on Training and Employment (SLATE) as well as getting support from local Ranken Technical College. The program provides state and private funds to help make 130 inmates, ages 17 to 24, become either job or school ready.

Most of the inmates at St. Louis’ Medium Security Institution are first-time offenders who are still awaiting trial. During that time, they could participate in the program, which would help encourage them to learn automotive or construction skills, provide financial literacy training and connect them with social service agencies that would counsel inmates on drug or alcohol addiction.

Mayor Slay said in his Tuesday announcement that while there are already reentry programs in place, this one works at helping first-time offenders before they succumb to a lifetime of crime. The program’s key goals are to 1) reduce recidivism; 2) provide access to supportive, credentialed job training before and after release; 3) connect participants to real job opportunities; and 4) help them open banking and savings accounts and value fiscal responsibility.

“We want to make it less likely that the people in this program end up back behind barbed wires,” Slay said in his announcement.

Because 90 percent of those housed at the Medium Security Institution have no previous criminal record, their participation in the program also has the potential to sway the courts to lessen charges to misdemeanors, St. Louis Corrections Commissioner Dale Glass told the Associated Press.

The program will typically take about a year for inmates to complete. Training would start while inmates are still in custody, but counseling would continue after their release as long as needed. The average stay in St. Louis jails is 233 days, including inmates serving short-term sentences, reported the St. Louis Post-Dispatch.

“This is a comprehensive way to get individuals who are in prison for a short period of time — young people — who show a lot of promise to turning their lives around and people who want to do it,” Slay said in his announcement.

A major supporter of the program is Missouri Senator Jamilah Nasheed, who said she has been putting funds into the budget over the last eight years, creating a total of $750,000 for reentry. “I can tell you that this program here is going to be a game-changer in the St. Louis area,” Nasheed said at the press conference.

Up to $250,000 in state and private funding will be used to help connect 130 inmates with jobs in the community or classes at Ranken Technical College, reported CBS St. Louis. Some funding for the program came from the Dennis M. Jones Family Foundation, which donated money that would be used as scholarships for program participants to attend classes, according to KSDK news station. If the pilot program is successful, the city will likely seek a grant to extend it, reported the Associated Press.