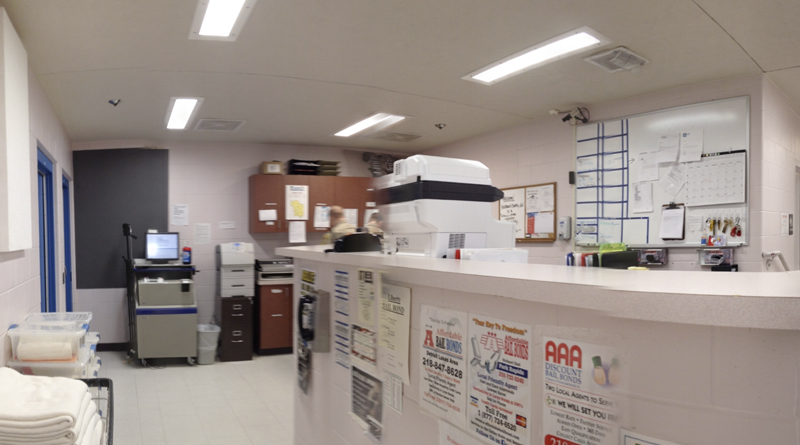 Inmate booking, like that seen here at the Hubbard County Jail in Park Rapids, Minn., can be streamlined through DPS’ software solution.

DPS started off as a reseller and third-party developer of facility-management software called Archibus, but then branched off to manufacture its own public safety web application from the ground up in 2013, according to Adam Shrum, assistant director of operations at DPS. Within its software, the company offers different modules based on a user’s needs. DPS originally started with a single booking module, but over the years they have expanded to include warrants, incident reports, computer-aided dispatch, evidence room and barcoding, offender registration and others.

In addition to safety, Shrum explained that the company is also simply trying to make lives easier with its software.

“I have heard time and time again from law enforcement officers that they are unhappy with their current software,” Shrum said. “Everything from, ‘it’s too clunky, it’s too old, it doesn’t do this, or it’s too expensive.’ There is a real need in the law enforcement community for affordable software that is capable of sharing data with other agencies, and can do so in a secure way.”

One of the things that sets DPS apart from its competitors is the fact that the web-based software can be used on any modern browser.

“We are one of the few web-based [software solutions] that can be used in any modern browser. [Our software] is optimized for the Chrome browser, while other traditional correctional software is desktop or Internet Explorer-based,” Shrum explained. “We integrate with the Google Places API, and we have a real-time CAD system.”

If you are not familiar with computer-related jargon, rest assured knowing that DPS can work on any web platform and the software can adapt to every state by means of the company’s fully configurable administration features.

The company does not launch new software often, Shrum explained. However, they have recently released Dynamic Inventory, which was launched to fill the gap of tracking physical goods. Shrum said that instead of continuously introducing new software, the company focuses on what it already has developed and works each day to make it better for the end-user.

The company currently has contracts with 10 facilities and states including, Oklahoma, Texas, Nebraska and New Mexico. Not only does the company supply its software to state Department of Corrections but also to police departments and county sheriff’s offices.

The largest job to-date that DPS has worked on is the full integration of DPS software for New Mexico tribal inmates to help with their entire booking process, which was completed last year.