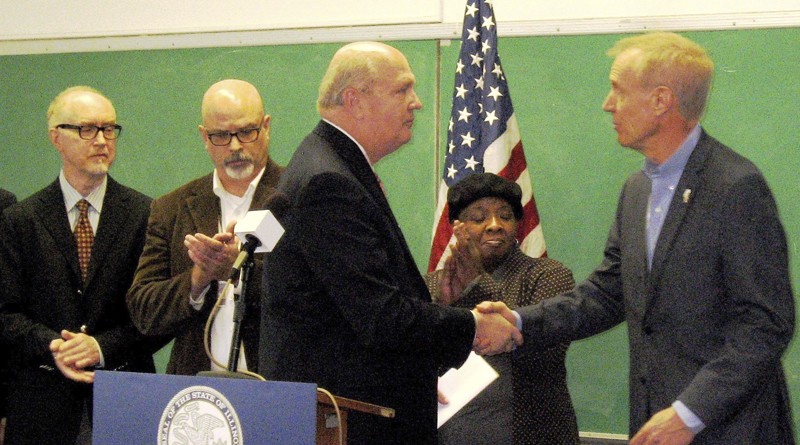 SPRINGFIELD, Ill. — Illinois Governor Bruce Rauner held a press conference on Dec. 14 to highlight efforts made by his administration to transform the state’s Department of Corrections (DOC) along with other criminal justice reforms.

“Criminal justice reform has been a top priority of our administration from the very beginning, which is why the progress we’ve seen at the Department of Corrections is so encouraging,” Governor Rauner said in a statement. “Through the hard work and dedication of Department of Corrections staff, we are closer every day to reaching our goal of safely reducing Illinois’ prison population by 25 percent before 2025.”

As roughly 27 percent of DOC’s population is on the mental health caseload, the DOC partnered with the National Alliance on Mental Illness (NAMI) to deliver the mental health training. The course provides lessons on conditions such as schizophrenia and bi-polar disorder, helps staff understand the effects of psychotropic medications, gives staff tools to recognize when an individual is in distress and offers suggestions on how to better communicate with them, according to the DOC statement.

Baldwin added in the statement that the DOC is committed to reforming Illinois’ criminal justice system and this mental health training is an important step in that transformation.

“The training gives our staff a glimpse of what offenders with mental illness are experiencing and provides strategic methods on how to better communicate with them,” he said in a statement. “We will continue to invest in our staff so they can be safe and successful on the job, while also working to better assist and rehabilitate our mentally ill offenders.”

One of the administration’s first acts was to establish the Illinois State Commission on Criminal Justice and Sentencing Reform to examine the state’s current criminal justice and sentencing policies, practices and resource allocation. The bipartisan commission presented an initial 14 recommendations to the governor in the spring of 2016.

Under Governor Rauner’s leadership, DOC has already started to implement a number of the commission’s suggested reforms administratively, while two bills have passed the General Assembly with bipartisan support, according to a statement. Governor Rauner previously signed a bill into law that requires judges to explain why an incarceration sentence is appropriate for a low-level felony offender when they have no prior probation sentences or no prior convictions for a violent crime.

The governor also signed other common sense bills to improve an inmate’s odds of success upon community reentry including one to allow former offenders to become licensed health care workers. Another will help youthful offenders by reducing mandatory minimum lengths of probation and offering treatment in place of incarceration for low-level offenses.