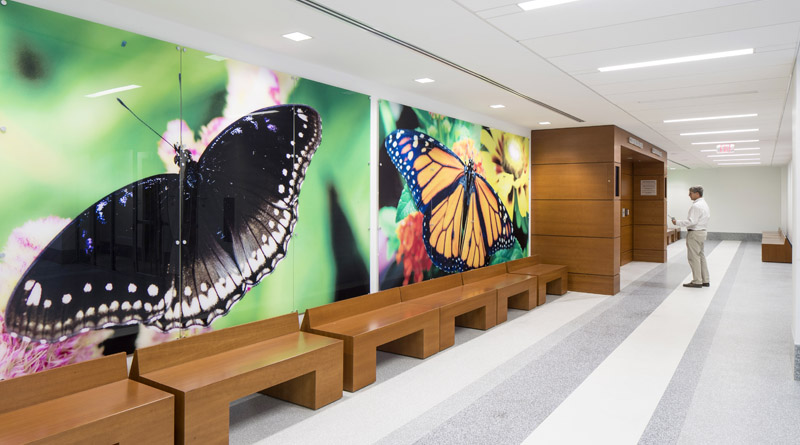 FORT LAUDERDALE, Fla. — On May 11, towering 20 stories into the Fort Lauderdale sky, the completion of the Broward County Judicial Complex West Building, designed by national architecture firm AECOM, was celebrated by a ribbon-cutting ceremony attended by dignitaries, judges, courthouse stakeholders and the legal community.

Contemporary in its design and providing a strong civic landmark and state-of-the-art technology, the Broward County Judicial Complex is both a reflection of the times, but also recognizes the history of the court in Broward County while reflecting the beauty of the Fort Lauderdale beaches.

As a major downtown public building, a dignified image to the downtown is present through the use of elegant, durable materials. Designed in 2012 during the return from the Great Recession, the county wanted to reflect the challenging times, while presenting a stately image. Calm is the goal of the light-filled design quelling the emotions of people entering the courthouse. The precast panels wrapping the glass consist of white and cream tones to give the facade a majestic civic expression.

The new building, in addition to the courts, includes administrative space for government agencies including the State Attorney, Clerk of Court and Court Administration. The building houses 74 courtrooms and hearing rooms for the County Criminal, Domestic Relations, Magistrates, Probate, County Civil and Circuit Civil courts components. Litigation spaces are specifically designed to meet the unique needs of each department and include a mixture of hearing and courtrooms of various sizes.

The building’s interior reflects Fort Lauderdale’s tourism marketing efforts by introducing the city’s theme, “From the seagrass to the sawgrass.” A small glass tile mural composed in patterns reflective of the ocean, adorns the public lobby as one enters the building. An open atrium soars six stories from the lobby and features a massive wall of oceanic colors. Each judicial floor showcases unique South Florida scenes in their public lobbies, providing visual interest to the users and a distraction from the judicial process.

The history of the Broward County Courthouse is not lost in this new ageless, aesthetic appeal. At the connection to the existing east building, a large tile mosaic of the county’s second courthouse has been created. The main entrance lobby to the public also features a historic bell from the original county courthouse. All public floors are covered in a pattern of terrazzo, a concrete and glass substance that is poured and divided by strips then polished to a sheen evoking parallels to classic hotels in the South Florida area such as the Breakers in Palm Beach.

The design of the new courthouse creates a timeless, aesthetically sensitive, civic landmark that reflects the importance of the justice system while bolstering the court’s need for security, flexibility and sustainability.