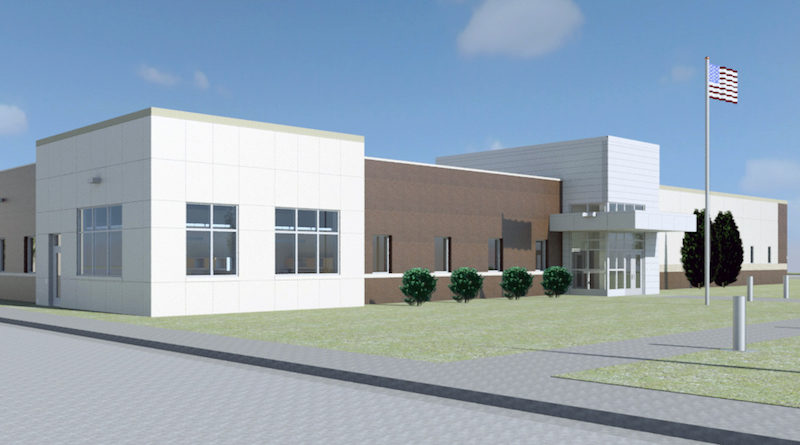 The construction team for the Clay County Jail is looking at completion for Phase I by September 2018. Photo Credit: Klein McCarthy Architects

MOORHEAD, Minn. — The Clay County Jail and Law Enforcement Center (LEC) project in Moorhead has come a long way since 2008 when Klein McCarthy Architects was first hired to program and design the jail and joint LEC. Now, the project team plans to complete Phase I by September 2018 after breaking ground in May 2017 — an exciting prospect for all involved.

After Klein McCarthy — based out of St. Louis Park, Minn. — was first hired in 2008, the project design progressed through the end of schematic design. However, with a lack of financial support, the project was shelved at the beginning of 2009, according to Scott Fettig, president of Klein McCarthy. The project resumed again, and design for the new jail started in August 2015, and then progressed to bidding in September 2016. From there, Construction Engineers, headquartered in Grand Forks, N.D., was chosen as the construction manager at-risk, with the project managed by their Fargo, N.D., office.

Now, with construction ongoing for almost a year, Phase I of the jail is making some serious progress. It includes a 75,900-square-foot facility with 65,200 square feet on the first level and 10,700 square feet on the second and mezzanine levels. The facility holds intake/release, inmate housing, programming and medical spaces. The guaranteed maximum price (GMP) for the jail is almost $30 million with a total project cost of approximately $35.5 million, including an additional parking lot for the county campus, according to Fettig.

The plan is to demolish the existing jail and LEC once the first phase is complete and after inmates have been transferred to the new facility inSeptember. From there, Phase II of the jail project will begin, which will include the food service, laundry, support services, public lobby and jail administration, according to Fettig. Completion of Phase II is projected for May 2019.

The new Clay County jail is a Class III, one-year confinement facility, and is designed with 116 cells — providing a 209-bed rated capacity within 11 housing units allowing for 14 possible classifications, according to Fettig. The facility contains all pre-manufactured steel module cells and shower units and does not include any dormitory housing.

Located in a residential area north of the downtown business district, it was important to “design a building whose image was not industrial looking and provided a scale and massing that didn’t impose on the surrounding homes,” according to Fettig. The new jail exterior uses durable exterior materials of precast with inlaid brick that blend and tie it together the County Courthouse and Family Services buildings located on the same property.

Much like many older jails across the country, Clay County was experiencing a greater need for inmate separation for genders, classifications of crimes and the increasing behavioral health component including mental health and chemical dependency. The design of the new jail seeks to serve in these areas.

“Throughout the design process, providing for greater behavioral health issues became a primary focus of the overall jail design as the major emphasis was changing from a ‘jail’ to a ‘correctional facility,’ not only in name but in how Clay County is approaching inmate rehabilitation and recovery,” said Fettig. “Everything from the location of this specialized housing away from the heavy traffic areas, splitting the housing units into smaller capacities, additional daylighting, softer finishes and furnishings all contributed to help provide for quieter dayrooms.”

The county’s coordination and communication has been efficient and very effective with design and construction on schedule and below budget, according to Fettig.