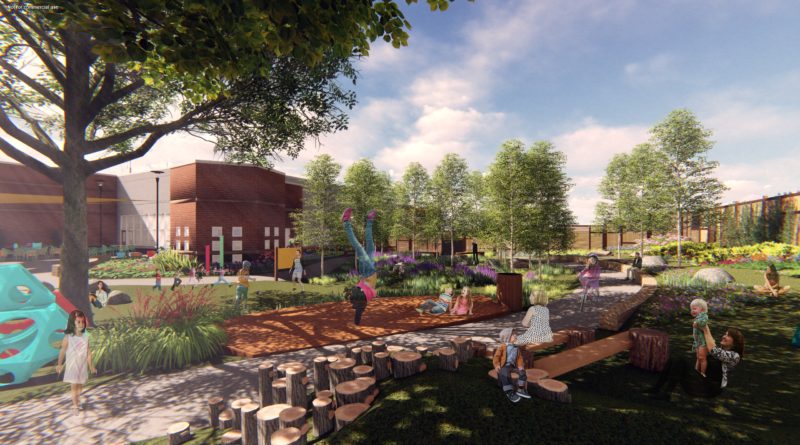 MITCHELLVILLE, Iowa — As author Alice Walker wrote, “In search of my mother’s garden, I found my own.” For children of incarcerated mothers at Iowa Correctional Institution for Women (ICIW) in Mitchellville, Iowa, this rings true thanks to the efforts of a bevy of Iowa State University students.

Under the direction of landscape architecture assistant professor Julie Stevens, the students are creating a garden oasis at ICIW — but it won’t just grow flowers and veggies — it will help grow bonds between children and their incarcerated mothers.

“This is the project I’ve wanted to do since the beginning of our partnership with ICIW,” Stevens said in a statement. “The bond between a mother and her child is critical for the child’s emotional and cognitive development.”

Studies indicate that there are adverse developmental issues and a predisposition toward crime experienced by children with a jailed parent according to Stevens. To wit, efforts to foster healthy parent-child relationships is an effective means to end an intergenerational cycle of incarceration. Moreover, research suggests that female inmates who are able to maintain or build healthy relationships with their families while incarcerated are less likely to experience repeat incarceration.

The new garden will feature a variety of outdoor learning spaces, an area for facility staffers to decompress and many other natural features. Significantly, there will also be a designated area for the children of incarcerated mothers to share visits in a non-threatening environment.

“We wanted to create a design that was truly informed by the women’s needs and desires for the space,” said Alyssa Mullen, a fourth-year student in architecture, in a statement. “One of our biggest realizations was that the women really missed everyday activities with their growing children. Because of this, we incorporated elements within our design that had a ‘backyard feel,’ from a porch swing to a small walking trail to fun play equipment.”

The project has been 20 months in the making as students began to redesign what was once a small, fenced outdoor enclosure with a couple of tables. Their assignment was to create a space that helped offset the impact of having an incarcerated parent. Students also had to account for any security concerns prison staff might have as well as budgeting the project. They also had to create a construction document and work in concert with inmates from ICIW, with whom they poured concrete and constructed a children’s garden.

Stevens and her students have completed several projects at ICIW over the past seven years. Among them are outdoor classrooms and cultivating an aspen grove. Once completed in the coming weeks, the new project will have cost about $40,000 to implement. It was funded entirely through community donations.

“Our hope is that the garden is not only a happy space for children, but a therapeutic environment where families feel comfortable enough to have tough conversations if that’s something that needs to happen,” said Stevens in a statement.

A ribbon cutting and dedication ceremony are scheduled for early June.