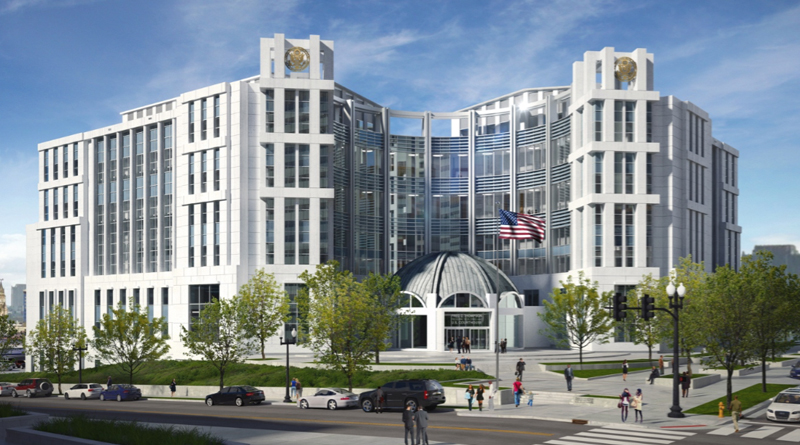 A new $194.5 million U.S. Courthouse in downtown Nashville broke new ground at the end of September and is set for completion in 2021. Photo Credit: Fentress Architects.

Fentress Architects, in a bridging design-build contract with Hensel Phelps Construction Company, will advance and refine the original design by Michael Graves Architecture & Design to create a distinctive courthouse that expresses the dignity and transparency of the judicial process.

Upon completion in spring 2021, the new $194.5 million federal courthouse will successfully consolidate the footprint of the court while boasting a stately presence in downtown Nashville.

“Originating from Michael Graves’ Architecture and Design initial design, the new U.S. federal courthouse in Nashville will provide a safe and secure environment while making it feel accessible to the public,” said Steve White, AIA, LEED AP BD+C, Principal and Director of Washington, D.C. at Fentress Architects. “Separate zones of security and circulation for different types of users contribute to enhanced security for court personnel and the general public.”

The six-story, 276,000-square-foot courthouse is sited on more than three acres on Church Street in downtown Nashville. It will include underground parking, eight courtrooms, 11 chambers, and is targeted to meet LEED gold certification. The site will accommodate the 30-year needs of the court, responding to downtown Nashville’s significant growth in new development.

Consolidating important judiciary functions into one location, the new courthouse will relocate the courts and court-related agencies from the existing facilities located in the Estes Kefauver Federal Building and Annex, improving efficiency and enhancing security for court personnel and the general public.

The Kefauver Federal Building and Annex was designed by the Nashville firm of Marr and Holman under the direction of the Supervising Architect of the General Services Administration David Allan Thorn, and was constructed in 1948. The building was occupied in 1952 and is typical of the modern style promoted by GSA in the late 1940s and 1950s. The nine-story annex to the building was completed in 1974.

The courthouse’s design is a testament to Michael Graves’ architectural legacy as a leader in postmodernism that seamlessly blends classical and contemporary design in order to symbolize the past and future of downtown Nashville. Clad in all white to express the grandeur of the federal judiciary, the building was designed to stand out as an important institution in its urban context.

Façades for the entry and public areas of the building will be glass to celebrate the openness and transparency of the United States’ democracy and judicial system. The primary façade is a grand apsidal curved wall with the entry rotunda at its center, establishing a welcoming entry for the public. Celebrating the role of the public in the judicial system, jury suites will be stacked as towers in the exterior massing.

“Several challenges were faced during the design process. First off, the building was designed more than 10 years ago,” said White. “When we took on the project with Hensel Phelps, we needed to ensure the design was fully compliant with current building, energy, and security codes/criteria established by the federal government. We have spent considerable time with tenant agencies, including U.S. Courts, U.S. Attorney’s Office, the U.S. Marshals Service, and the GSA, to realize a design that meets their current needs.”