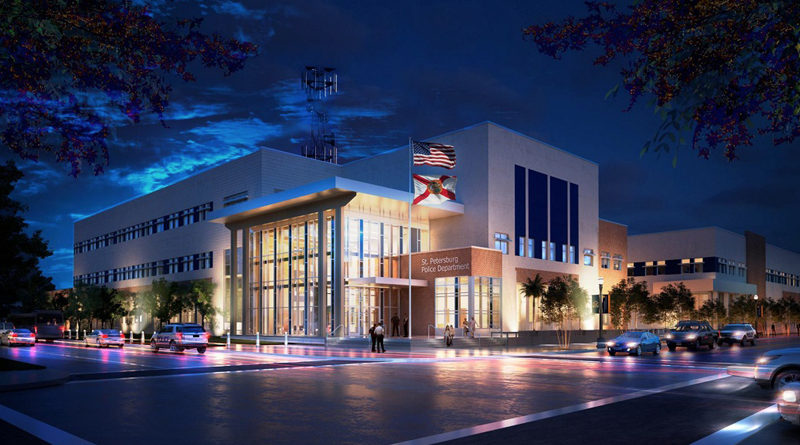 The City of St. Petersburg Police Headquarters is nearing the completion and is set to officially open in February 2019. Photo Credit: Harvard Jolly Architects

ST. PETERSBURG, Fla. ­— The City of St. Petersburg is nearing the completion of its new $85 million police headquarters, which is set to officially open in February 2019.

Harvard Jolly Architects and AECOM are serving as the project’s architects. Ajax Building Corporation is the construction manager for the city’s new police headquarters, which will consist of a new main building with an administrative wing, a property and evidence wing, a parking structure, and a central energy plant on a 6.3-acre site.

According to the Tampa Bay Business Journal, ground was broken on the new facility in April 2017 and construction began in early May. The main headquarters has reportedly been built to withstand Category 5 hurricane strength winds and ballistic impact. The Journal reports that major redundancies in vital systems have also been included in the facility’s initial planning in an effort to ensure the police department is never without essential services, including multiple generators to reportedly protect against power outages and two layers of roofing for the entire building, according to City Architect Raul Quintana.

The Administrative & Property & Evidence building, and the CEP will be tilt-wall construction. The parking garage will be pre-cast concrete.  The CEP will house water-producing, high efficiency pumps, cooling towers, and other mechanical equipment which will supply chilled water to the air handling units inside the main building. The facility is served by an emergency power system which will service the critical operations areas in addition to life safety functions.  The facility will integrate leading edge technology, communication, and audio/visual systems.  There will also be an alternate to add a photovoltaic panel system at the parking garage. The entire facility will be designed to a 195 mph wind design criteria.

A report from the Tampa Bay Business Journal contributed to this story.