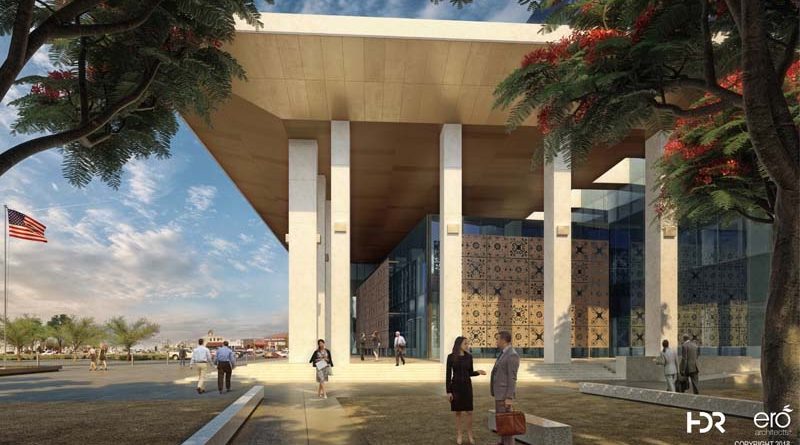 Designed by HDR, the new Hidalgo County Courthouse will comprise 368,000 square feet of space upon its completion. Photo Credit: © Renderings courtesy of HDR and ERO Architects

EDINBURG, Texas — Hidalgo County’s 1950s vintage courthouse infrastructure is no longer able to support the demands of the justice system amidst the ever-evolving times of the 21st century as the county becomes one of the most rapidly growing counties in the country.

With too few courtrooms, little security, poor air quality and even judges being jammed into closets as chambers, Hidalgo County tagged HDR as the prime architect in designing a brand-new contemporary courthouse.

The new 368,000-square-foot, seven-story courthouse is being delivered by a team that includes HDR as the lead judicial design architect and co-lead design architect, in association with two local partners, ERO Architects and Warren Group, and Jacobs Engineering serving as the program manager with Morganti Construction as the general contractor.

The plans include designing a facility that can accommodate 24 district and county courtrooms and one court of appeals, district and county clerks, jury services, public defender and indigent defense, Hidalgo County Bar Association, and detention spaces that will provide spaces for defendants in custody within ground floor central holding; additional space is allocated to each court floor and shell space for six additional future courts.

According to HDR, the new courthouse project will also include a central utility plant planned within a separate building on the site, a single security screening area, secure parking for judges and elected officials, along with a loading dock area, parking and a food court for the public and staff.

The chosen site closes and diverts a nearby highway to create an enlarged two-block downtown square coordinated with the City of Edinburg Downtown Master Plan. The pedestrian approach also incorporates and highlights landscaping and paving to reflect the regional themes of ranching, agriculture and the Rio Grande River.

Kate Diamond, design director at HDR, explained that the team wanted to not only deliver a state-of-the-art courthouse to Hidalgo County, but to also design a courthouse that embraces the local culture and pays homage to the land.

Located in the center of downtown Edinburg, the courthouse is being designed to become a symbol of pride in South Texas — fitting into the community by incorporating familiar tones into the façade and interior.

“The design goal was to create a contemporary courthouse that’s a high-rise, but one that was uniquely of the character, culture, heritage and aesthetics of the Rio Grande River Valley,” said Diamond. “We tried to use color and landscape in specific reference to the Talavera tile that was always manufactured in the valley that becomes a part of welcoming you to the courthouse.”

To complement the nearby brick-building city hall, they used those porcelain tile colors that reflect a similar warmth and tone that fits the scale of the new courthouse building.

And although sustainability was not a formal emphasis in the design process; the team oriented the building correctly so that the glass expanses faces due north, while the remainder of the building has a high-performance skin with enough glazing to provide plentiful daylight, but also enough insulation to reduce the energy load significantly.

The courthouse itself and the nature of the design also improves safety by properly separating the public, the restricted and the in-custody population so that they meet in the courtroom and not the hallway.

It also brings together many of the country services — including the county and district clerk and allows the community to know where they are going and do multiple things along the way.

The design team has also faced many challenges in creating the new, modernized courthouse under the limitations of a tight budget and without the option to raise taxes.

“We are in tough times on costs with not just tariffs on steel and aluminum, not just one of the major manufacturer fabricator installers of detention hardware and walls going belly up and therefore having a rather limited competitive world for detention material — but also with Hurricane Harvey, Houston and other parts of the gulf kind of sucking up a lot of the capacity for construction in Texas, which created cost problems,” said Diamond

Diamond explained that cost has been a serious driver since day one. Working under a tight budget while also making sure to not deliver a “watered down” courthouse — the designers had to be extremely collaborative with the contractor that was brought on to brainstorm innovative ways together to build things smarter and to save money.

“We’ll probably be working on it all the way through construction and I feel the entire team is working hard to do exactly that: deliver on the public dollar and deliver a courthouse that really serves their community,” said Diamond.

Although the constraints of the budget prevented the integration of costly technological systems, the team provided the building with an overall spine and infrastructure capability that can accommodate future additions.

Digital signage is a key incorporation of technology in this new facility, putting flat screens in every room, and creating architectural clues to the elevators while also using digital signage throughout the facility to clarify wayfinding.

Although there are now only 24 courtrooms, there is room for six additional courtrooms.

“In a 30-room courthouse, wayfinding is a critical part in making it work efficiently. In vertical courthouses, you must ensure the elevator cores are in the right place. Again, because we were very tightly constrained on costs, we shelled out space out future elevator space,” said Diamond.

Furthermore, the jail addition and expansion portion of the project adds 1,000 beds to the jail.

The courthouse is anticipated for completion by 2021 after an official groundbreaking took place in September 2018.

Editor’s note: In the March/April print edition of Correctional News, the lead design firm for the Hidalgo County Courthouse project was incorrectly stated as DLR Group. Our sincere apologies to HDR and DLR Group for this oversight.