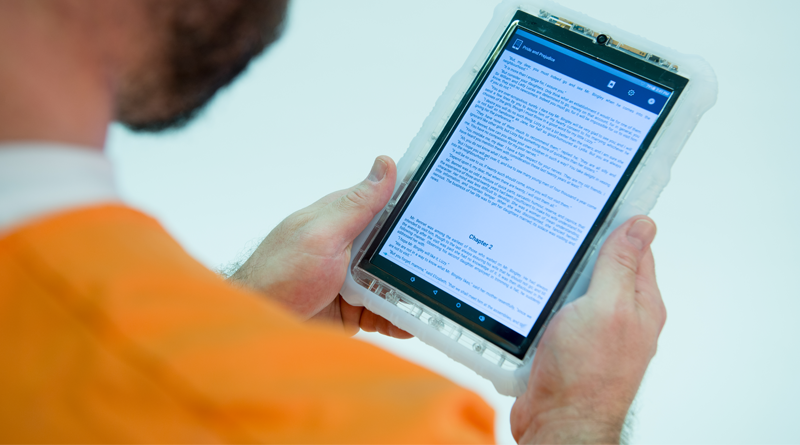 GTL tablets are constantly updated with new resources to assist incarcerated individuals in the process of rehabilitation. Photo Credit: GTL

FALLS CHURCH, Va.—GTL has stepped up with a few intriguing initiatives in recent months, with two efforts tied to seasonally meaningful causes and another focused on cooking up career opportunities for inmates in the culinary field.

The firm for example announced its support for National Crime Prevention Month in October. GTL Fusion Services provides investigative tools and highly qualified intelligence analysts to assist correctional facilities in preventing crimes before they happen, solving them after they do, and increasing safety for those in facilities and surrounding communities.

GTL Fusion Services has seen a 25% increase in the number of cases for 2021 compared to the previous year, including forensically processing over 3,500 contraband cell phones. In addition, GTL has provided over 2,500 security leads to facilities.

In another instance, an analyst was able to identify a group of individuals involved in a dozen different schemes related to pandemic unemployment assistance and unemployment fraud.

Stepping up to Stop Suicide

The firm also showed its support in September of National Suicide Prevention Month and the need for increased focus on suicide prevention within correctional facilities.

While these numbers are distressing in and of themselves, it is even worse for incarcerated individuals. Over 37 percent of Federal prisoners and 44 percent of jail inmates were diagnosed with a mental disorder, and in many states, there are more individuals with mental illness in correctional facilities than in psychiatric hospitals. To complicate matters, these facilities often do not have the resources or budget to counteract the rising percentage of their population with mental illness or the associated suicide rates. In fact, suicides are the leading cause of death for jails, accounting for almost 30 percent of deaths in 2018.

“Our platforms and programs are designed to foster a safe environment within a correctional facility while providing necessary resources for those incarcerated” said Matthew Caesar, GTL executive vice president, customer solutions. “With phone calls, messages, and video visits, they can keep in contact with their support networks, gaining strength and hearing messages of affirmation and encouragement. With tablets, they can improve their mental wellbeing, focus on positivity, and work toward successful reentry. What led a person to incarceration is most likely the lowest point in their entire life—we will continue to offer resources that promote healing and help them reach new heights.”

GTL tablets are constantly updated with new resources to assist incarcerated individuals in the process of rehabilitation. Through partnerships with organizations and individuals, GTL provides access to programming that can help individuals find the good in every day and look forward to release.

GTL tablets have the ability to decrease suicide attempts and ideations, inmate-on-inmate violence, inmate-on-staff assaults, and behavior code violations at facilities where they are deployed. Incarcerated individuals can spend their time in a positive manner, not only with these rehabilitative-focused programs, but also with music, eBooks, movies, games, educational courses, religious texts, and more.

Through these tablets, incarcerated individuals are able to gain access to a variety of curricula, including courses from EDWINS Leadership & Restaurant Institute. EDWINS is a Cleveland-based French restaurant and training program that has had extraordinary success helping nearly 500 returning citizens learn the art of fine dining, while gaining life skills and training for a job in the food service industry.

Believing in the Institute’s mission, GTL partnered with EDWINS in 2020 to support its efforts to provide incarcerated individuals and returning citizens with a foundation in culinary arts and the hospitality industry. Since then, by adding the EDWINS courses to GTL’s tablets, incarcerated students across the U.S. have an opportunity to learn critical introductory cooking skills before going on to participate in the full program upon release. This new application is completely free for facilities that already have GTL’s Learning Management System and is offered at no cost to incarcerated individuals.

The EDWINS curriculum being offered on GTL tablets includes such topics as gastronomy; culinary math; menu prep; ServSafe certification exam preparation; essential front of the house training including drink preparation and bartending; and back of the house training including food selection and preparation. Additional courses cover tools and equipment; grinding, mixing and pureeing; refrigeration; knife skills; stocks and more.

The EDWINS tablet curriculum is part of GTL’s growing Reentry Services, which helps to break down barriers and put incarcerated individuals and returning citizens alike on a path to success.

Editor’s Note: The above article is an abridged version of a feature that appeared in the December/January 2021 issue of Correctional News.