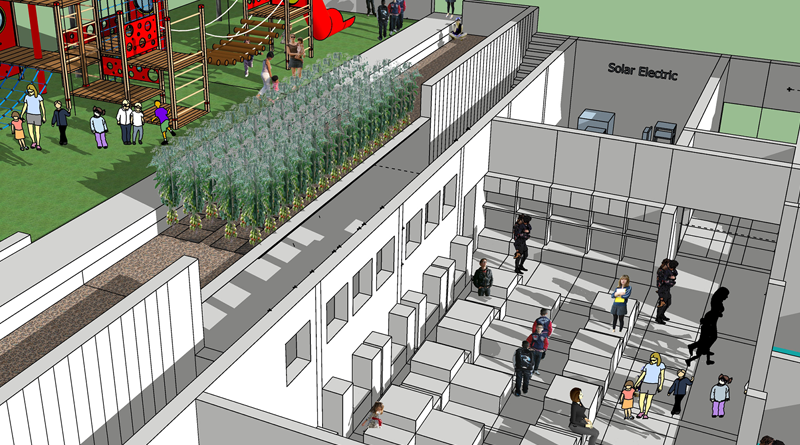 A daycare center provides instruction, day care certification to the mothers, and security for the young children.

As an architect and educator frustrated by the many challenges facing an unprepared inmate recently released for his third time in prison, I believe we are long overdue in rethinking the purpose and form of incarceration in an era of social justice. What follows is a such a proposal, Rehab City.

Rehab City can be compared to a walled city with the emphasis on city where the inmates or ‘residents’ live in secure single occupancy rooms. Rehab City also resembles a traditional monastery where work and study predominate, or it can even resemble the traditional Main Street where people live above their work.

Rehab City is not just the dressing up of the old prison model but rather it completely redefines the daily routine of the resident by providing a context that supports a secure place for work, learning, therapy and recreation. The architecture of Rehab City is completely redefined where every square foot of building and landscape has been programed and designed to prepare the residents upon their release to make their transition from ‘inmates’ to becoming contributing members of civil society.

During a typical day the residents devote 4 hours a day, 6 days a week, to Work earning electronic credits that will pay for the upkeep of Rehab City (20%) as well as an additional 20% that can be set aside into a savings account that can be converted into dollars upon their release. The remaining 60% covers their daily expenses such as eating at resident-run Rehab City restaurants (there are no cafeterias in Rehab City), laundry and even upgrading their single occupancy rooms. An additional 4 hours a day, 6 days a week are spent either in Learning leading to diplomas and certification and/or for Therapy. An equivalent 4 hours a day, 6 days a week is allocated to Recreation. Within the walls of Rehab City, the residents move about without escort, wearing an Ultra Wideband Tech (UWB) bracelet that provides access to assigned activity spaces as well as keeping track of hours spent in work, learning, therapy and recreation. It also records electronic credits earned as well as credits spent, teaching personal finances in the process.

The resident’s cell measures 12 ft. by 16 ft. and becomes a mini apartment with wide sliding doors controlled by the resident and staff at one end and an equally wide window at the other end providing plenty of sunlight and fresh air. Along the sidewalls, four zones 3 ft.by 8 ft. hold a private shower and toilet eliminating the need for group bathrooms as well as space to accommodate expanded sleeping, storage and study desks as well as a kitchenette. Built by residents of Rehab City they can be paid for by the electronic credits earned by the residents. The sleeping zone can also be upgraded with bunk and trundle beds to accommodate women and small children when permitted.

A typical residential floor consists of 13 residents in mini apartments with a floor monitor or ‘lifer’ charged with overseeing this mini neighborhood. A laundry acts as a meeting space at one end just adjacent to a fire-escape landing or fresh air balcony filled with plants. The wide interior hallway acts as an interior street where the residents continue to meet, hopefully forming a self-supporting unit in the process.

The typical residential building is much like an urban apartment building where three floors of mini neighborhoods are stacked one upon the other. No residents pass through neighboring floors to exit the building. On each pair of residential buildings one rooftop holds a greenhouse providing year-round crops for Rehab City Restaurants as well as teaching residents the latest greenhouse technologies. A second rooftop holds solar panels fabricated and installed by residents providing energy to the connected pair of buildings. Those fabricating, maintaining the state-of-the-art energy systems of the typical building can also earn a Building Engineering Certification.

At street level, the resident-run restaurants, bakeries, millwork spaces and learning classrooms are

easily seen as one walks down a single pedestrian street. Just below ground, and easily accessible, well-lighted and ventilated spaces hold therapy spaces often shared with mini work gyms so that those lifting weights can participate, when inclined, in the discussions of their colleagues. Other similar spaces hold shared religious spaces as well as classes in yoga, dance and theater. Finally, a day care center provides instruction, day care certification to the mothers, and security for the young children.

Along the pedestrian street, each pair of residential buildings share a single stair/elevator core and when added in pairs along the pedestrian street make up to 80% of the construction of Rehab City. Interstitial courtyards formed between the buildings hold crops producing goods for Rehab City as well as assuring that plenty of fresh air and sunlight penetrate the windows of every individual mini apartment. The courtyards also lead to adjacent fields of agriculture, a chicken coup, a small experimental fish farm, and special buildings where the fabrication of solar panels take place.

The pedestrian street also leads to a semi-public urban square where a controlled access permits family and neighborhood visitors to enter and purchase goods produced in Rehab City as well as participate in events produced by the residents. They can also register at the central ‘town hall’ to visit residents over meals prepared by Rehab City restaurants. If they want, they can spend the night upstairs in a hotel of mini apartments where residents are learning hôtellerie. Guests can pay for all of this by exchanging money for chips at the control gate. Residents can also pay for invited family using their earned electronic credits.

Rehab City comes in a variety of scalable forms. Type One holds a single pedestrian street of 400 plus residents leading to a single semi-public square flanked by garden apartments built outside Rehab City walls. These hold mentors, staff and their families as well as provide half-way houses for residents making the transition back to civil society. Type Two places an expanded semi-public square between two pedestrian streets permitting 800 plus residents housed in two separate neighborhoods. A Starter Rehab City Type 1 of 200 beds provides a place for testing a Rehab City approach while still permitting expansion at later stages. Finally, Rehab City can be adjusted to fit a variety of sites either rural, suburban or urban. It can occupy agricultural fields, abandoned shopping centers or quasi-vacant industrial urban sites close to neighborhoods where resident family members often reside.

In many ways, Rehab City can become an alternative to traditional incarceration where rehabilitation takes precedent over punishment. In the process Rehab City becomes a sustainable compact village where the residences prepare, grow, assemble and oversee most of the products required by any small community. Inside Rehab City walls, the residents learn to work as well as help each other in their anticipation of returning to civic society where they will be better equipped to make a contribution.

Perhaps these are just naïve delusions of a retired architect academic, but hopefully they will serve as a catalyst for discussions revisiting incarceration where those confined can be treated with dignity and empathy. Maybe there is a better name for Rehab City since if we ever eliminate incarceration, Rehab City could be easily transformed into a place for the homeless, the battered, and even for troubled adolescents. But first we need to rethink reincarceration. Hopefully this will be fodder for further discussions.

Stanley Ira Hallet, FAIA, is the Former Dean of The School of Architecture and Planning, The Catholic University of America.