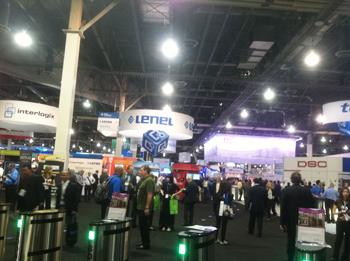 LAS VEGAS — ISC West, one of the security industry’s largest gatherings, wrapped up in Las Vegas this year with over 1,000 exhibitors.

ATLANTA — As of press time a vendor had yet to be selected for a lock replacement project at the Fulton County, Ga., Jail.

The cost to install 1,310 new tamper-proof locks is estimated at $6.5 million. Fulton County Colonel Mark Adger, the chief jailer, said the price is justified. Adger said inmates can open the current locks using items as simple as strings and socks.

Different methods have been attempted to fix the problem, according to Adger. He said plates were installed on the frames to prevent inmates from tampering with the locks.

END_OF_DOCUMENT_TOKEN_TO_BE_REPLACED
Featured Articles
February 26, 2010March 1, 2010 2704 Views custom tractor trailers, Juvenile, LEED, Reno
The illicit introduction of cell phones into correctional facilities began to emerge as a serious problem with dangerous public-safety ramifications just a few short years ago. Today, as predicted and feared by many, the proliferation of cell phones in prisons has reached epidemic proportions. END_OF_DOCUMENT_TOKEN_TO_BE_REPLACED
Featured Articles
November 23, 2009 2160 Views Background Check, Reno, university remodel
Following his recent retirement as director of security technology with the Massachusetts Department of Correction, Alexander Fox is leaving the public sector after a 29-year career to focus his energies, efforts and expertise on security and technology issues as a private sector consultant.
END_OF_DOCUMENT_TOKEN_TO_BE_REPLACED