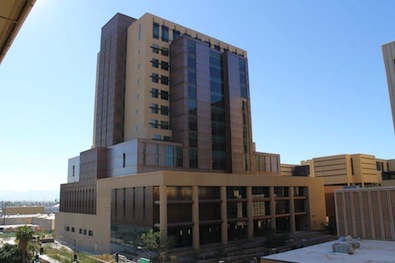 The new 16-story Maricopa County Downtown Court Tower will serve as an extension to the two existing facilities — the Central Courthouse and East Courthouse — and address space and security concerns.

In the older buildings, elevators were often jam-packed and the criminal courtrooms were beyond capacity, causing trial delays. There were also security issues, including an escape during a trial, rooted in overcrowding and outdated design.

Interconnected to the older courthouses, the new 700,000-square-foot tower has three distinct entrances to facilitate the flow of traffic through the central court, the east court and the new tower.

“What is really interesting is the connectivity between this new criminal tower and the other buildings,” said Cari Gerchick, communications director for Maricopa County.

“The public and the secured staff and the in-custody secured system are all different,” said Jim Miller, project director at Gould Evans. “They never come into contact with one another. The only place where those three circulation systems meet is within the well of the courtroom.”

The building is designed so inmates’ foot routes do not come into contact with those of the public. There is a public stairway and a secure stairway, and one cannot get into the other.

Even in the well of the courtroom, there are designated areas for the defendants, the victims, the defendant’s family and the public. Some courtrooms have two jury boxes.

“We did not design and build this building so the courts were specific to the judges,” Gerchick said. “It is cheaper to do two trials at the same time, if you are only doing them once. There is a master planner that assigns judges, and cases, to specific courtrooms depending on the need. Our model is, ‘How much space do you need? What special needs do you have?’ And then we tell you where you are going.”

In the main lobby, screens are updated with courtroom information in real time. “It is a well-organized way to use court resources,” Gerchick said. “It is really, really novel.”

To best use space and allow for flexibility, judges are not assigned their own fixed courtrooms. The superior court designed a system and partnered with the county during the design to make a building that, for the first time, supported this new model.

In addition, escalators connect the first, second and third floors to help alleviate the crowds that swell during peak times. The high-volume courts in the podium of the building were placed on the lower floors so the escalators don’t get too overwhelmed, said Steve Jordan, director of construction services at Gilbane/Ryan.

There are eight public elevators, plus secure elevators for staff and those in custody.

The lower level one and level four are the detention areas. In central holding, capacity reaches 1,100; another 400 can be held on the fourth level. Holding at the new tower also serves the Central Court Building and East Court Building, which are connected via tunnels from lower level one. The facility also separates males and females, adults and juveniles, gang members, and other special inmates and groups.

In addition, the tower serves as a transportation hub. Prisoners are bused to and from this facility across Phoenix.

“There are varying size holding cells, small and large,” said Keith Stapelton, executive vice president of Habersham. “There are doubled stacked panels where the bottom panel is 10 feet and a panel stacked on top of it can reach up to 20 feet — from the slab-on-deck to the slab-on-deck — and that basically creates a security envelope from the ceiling to the floor.”

“If there were not perforations in the ceilings, it would have sounded like we were in a container or hull of a battleship,” Stapelton said. “We had a lot of folks comment on how quiet it was.”

Norment Security Group served as the Detention Equipment Contractor and held the supplier contracts for Global, Chief, Habersham and Airteq.

The detention holding areas are operated by the sheriff’s office and totally independent from the courtrooms, said Jack Johnson, vice president of West Coast operations for Norment.

“The only way you can access those courtrooms is from the detention areas,” he said. “Level four is almost identical to the lower level one; the only difference is that’s where you have the visitation.”

The visitation area allows for direct visitation, not video or remote visitation. The inmate and his or her attorney can meet, separated by glass. For communication, there is a paper feed and a perforated spot in the wall.

The secure holding areas between the courtrooms are benched areas with some individual cells and two visitation rooms.

The holding area is accessed via secure elevators from level four. On level four, there are 28 visitation rooms. 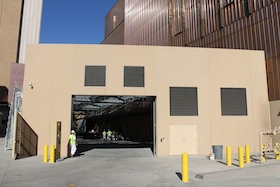 Johnson said that the real challenge in creating this tower, which has 22 operating courtrooms, and shell space for 10 more, is to be able to handle many cases and maintain a secure distance between the visitors, judges and inmates.

The interior circulation takes place inside a nearly 300-foot tower that has an acre-and-a-half footprint and narrows as it goes up. The lower floors, collectively known as the podium, are the first, second and third floors — the high-volume area.

The Regional Court Center (RCC) and Early Disposition Court (EDC), located on levels two and three, are the high-frequency cases, where the plea bargain has already been agreed to.

“The high-volume courtrooms are absolutely critical in a jurisdiction of this size and with the number of cases that we get,” Gerchick said.

The building is designed to last 100 years. “Being a courthouse, they had to be [made of] materials that were appropriate for the dignity of the court,” Miller said.

“What I think was very unique, was suggesting copper, over the other materials, as a cost-savings material.”
Copper is clad on the mid- to upper-portions of the building’s exterior. It was bought at a time when its price was at a historic low.

“Copper went from over $4 a pound to $2.30 cents a pound, and we were able to take advantage in the market conditions,” said Todd McMillen, project executive at Gilbane/Ryan. “We responded in the design process by modifying the exterior skin from a primarily precast feature to a precast and copper feature, and saved the client over $3 million.”

The exterior copper is pure copper that will weather and oxidize in the following years, ending up as an old penny bronze. It will not turn green as copper does in some other environments. The copper is nearly 100 percent recycled.
The metal stands in “pretty attractive contrast,” in Miller’s words, to precast concrete panels, between 6- and 8-inches thick, placed relatively low in the building. Architects selected it for its security and high-thermal mass.

The terrazzo flooring that covers the interior of the lobby was chosen for its long lifespan, low maintenance and durability. A local artist incorporated an abstraction of the Arizona and Maricopa County landscape into the terrazzo. The pattern and the design are different on every floor.

A travertine stone is present in the new tower at the elevator bays, on the south side of the lobby and in the East Court building. The stone is used in the high-volume areas where durability and impact resistance were key.

During the 2 million man-hours that went into construction, worker safety conditions were held to a high standard.

An EMT or paramedic trailer was on-site full-time. During peak days, more than 800 workers were on-site.

“We never had an instance where a worker who was injured was not able to return to work the next day,” McMillen said. “We are very proud of that fact.”

The labor force also supported the local economy: 97 percent of the trade contractors were local residents. Gilbane/Ryan managed the project during an up market and into a down market, while allowing savings to go back to the county for additional projects.

With a price tag of approximately $335 million, the criminal court tower is the county’s single largest project paid for in cash. The estimated savings are $190 million in bonds. There was also no cost to acquire the site, which was secured through an intra-governmental agreement.

The building is expected to receive LEED Silver recognition under the U.S. Green Building Council. The formal opening was Feb. 14, Arizona Statehood Day and its centennial.