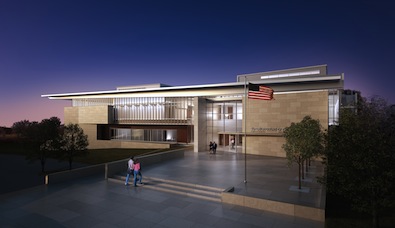 SAN ANDREAS, Calif. — Construction has began for the new Calaveras County Courthouse in San Andreas, Calif. McCarthy Building Companies Inc. is the general contractor for the 44,600-square-foot building and DLR Group is the architect for the project, slated for completion in 2013.

The $45.4 million courthouse will consist of four-courtrooms within the two-story facility. The new courthouse will replace the existing overcrowded Calaveras Courthouse that features two courtrooms, as well as a leased modular building. It operates in less than 9,000 square feet, so the new courthouse will allow the county much more space to conduct court procedures and will help serve the 350 county residents at the courthouse everyday.

“The Calaveras County Courthouse will be constructed to accommodate the region’s current and future needs, improve service to the public and provide a more secure infrastructure,” said Matt Wade, McCarthy’s project director. “The new courthouse will contribute not only to the AOC’s [Administrative Office of the Courts] goal of an improved court system statewide, but also specifically to the enhancement of court services and access offered to Calaveras County residents.”

The new courthouse will be located north of the county government campus and adjacent to the site of a new county jail — which will be connected. The site will also include 278 surface parking spaces for court visitors and staff. The designers wanted to make sure to accommodate the larger capacity for those visiting or frequenting the courthouse.

“The new Calaveras County Courthouse will provide a significant improvement to the current cramped and dated facilities,” said Jon Anderson, DLR Group’s principal-in-charge. “The building itself will be a reflection of our modern times layered with elements of our past and gestures toward the Calaveras County region. Ultimately, the building will reflect the dignity and honor associated with courthouses.”

The design of the building reflects the courthouse’s natural setting and minimizes its impact on the surrounding oak woodlands. The first floor will include jury assembly, clerk services and court offices organized around a natural light-filled, two-story entry lobby and great hall. The four courtrooms will be located on the second floor. DLR’s design has been recognized by the American Institute of Architects’ Academy of Architecture for Justice, receiving an award of merit in the 2010 Justice Facility Review.

The firm overcame several challenges in the design process including preserving the site’s natural setting as well as security details.

“As with any courthouse project, the conflict between openness and security is always a difficult issue to address,” said Anderson. “By working with established security standards for glazing systems and the threat assessment documents provided to the team, a strategy was devised to successfully balance issues of security, solar control and transparency.”

The footprint was kept compact in order to preserve the site’s natural integrity. The design was also unique in the sense that the county functioned with all court related services on one level — by having a two-story design it challenged the previous space. Designers were able to make the two-story building work for the county by allowing them easy and efficient access to the first and second stories of the building.

“To minimize the impact to operational efficiency, the program elements were carefully stacked with vertical transportation systems located to support easy and efficient communication between floors,” said Anderson.

The design and construction of the building will also focus heavily on sustainability. The building plans exceed state requirements for energy efficiency by 20 percent. The courthouse is expected to earn LEED silver certification by the U.S. Green Building Council.

The building features a planted green roof to minimize the urban heat island effect as well as a photovoltaic array on the roof that will generate about seven percent of the building’s power.

The courthouse will also use low-VOC materials in the design and building process, and features a high level of energy efficiency throughout the building, beating code requirements by more than 30 percent. The construction team will divert 95 percent of construction waste from the waste stream for recycling.

The courthouse will be the first dedicated courthouse facility in Calaveras County — the existing courthouse is merely two courtrooms with adjacent court related office space within the confines of an existing county services building, used for a number of other county functions, according to Anderson.

“The new courthouse will address overcrowding and provide security provisions for judges, court-staff and the public that are current non-existent,” said Anderson.

The courthouse will provide the needed space for those using the facility. The original courthouse was built in 1964 and has not been modified since — leaving many problem areas that the new courthouse addressed in its design.

“In the current courthouse, prisoners use the same hallway used for court-staff and the public, literally coming shoulder-to-shoulder with court reporters, witnesses and the general public,” said Anderson. “The new courthouse, with three separate circulation systems, will provide the highest degree of security for judges, court-staff, public and in-custody court participants.”

The site of the courthouse also holds some significance. The courthouse is located on a hill overlooking the town of San Andreas — the site is rooted in the traditional idea of placing the town courthouse at the top of the highest point in town, establishing the power of the law.

“The hilltop location in San Andreas will set the building apart from the neighboring jail, establishing it as an important civic building for Calaveras County,” said Anderson.