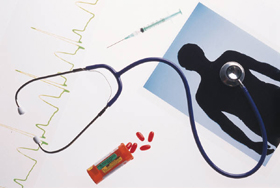 The contract was approved by Corrections Director Charles Ryan and reviewed by Governor Jan Brewer before issued. The contract will be renewable for two additional years.

Wexford wasn’t the only company trying to win the contract with Arizona Department of Corrections. Brentwood, Tenn.-based Corizon also went up for the bid, but offered $1.1 million more than Wexford. Wexford’s winning bid was for $116.3 million a year.

“There was a lot of interest in the private health care sector for this project. There were about four to five bids and ultimately Wexford was chosen,” said Arizona Rep. John Kavanagh, who has worked to pass the bill.

There has been controversy over whether or not privatizing prison health care is the best option for states. An effort was made last year to privatize the prison system but ultimately failed. Kavanagh has been pushing the bill ever since, saying that it will indeed save the state money.

“We received a great deal of resistance from the corrections department in the past. I think most organizations resist losing responsibilities because it makes them smaller, being private or public, people like keeping their organization intact. There’s always a resistance,” said Kavanagh.

“The major reason why we went with privatization is because unfortunately public sector employees are pricing themselves out of the market particularly with the high costs of benefits, especially pension costs.”

Gov. Brewer is also looking to raise the pay of all government workers by at least five percent, according to Kavanagh that would hurt the system even more.

Those opposed to the bill for privatization say that it’s never been about saving money and the amount of jobs lost will be detrimental for many families. Six hundred state employees could be out of a job — but Wexford could possibly interview some for employment, yet the possibility of hiring previous state employees is not official, according to Wexford.

“We express a hope that they could hire current employees, although we didn’t mandate that. I expect they will though. The benefits would probably be less, I’m not sure the salaries would be less because we’re fairly competitive with the private sector,” said Kavanagh.

By using a private vendor the system will be able to save costs with employee benefits. If Wexford chooses to hire current employees their pensions would be significantly lower but Kavanagh believes the salaries should stay relatively the same. Wexford is also bringing more equipment and services of their own to Arizona.

“We’ve also discovered some secondary savings. The corrections director [Ryan] told me yesterday that the private company will be bringing more equipment and personnel to the prison which will reduce prisoner transportation to off-site hospitals and that’s going to free up a large number of corrections officers who spend a lot of time transporting prisoners — so we’re going to be getting an unexpected boost in our correctional officer population,” said Kavanagh.

The transition of Wexford’s health care services should be complete by June 30, according to Wexford spokeswoman Wendelyn Perkich.

The Arizona Department of Corrections hopes that with the move to a private health care provider it will improve the previous system that has been scrutinized in the past.

The American Civil Liberties Union and California based-Prison Law Office filed suit in a federal court recently regarding the inadequate care of inmates in the Arizona Department of Corrections system. The charges include not giving proper medical care and mental health care to inmates for weeks and months for minor to life-threatening conditions.

“Our current government health care provider is under criticism — they are under attack from outside groups saying they are providing inadequate health care. Now with privatization they don’t have the direct burden,” said Kavanagh.

If the contract has the same terms as those listed in the request for proposals — then
Wexford will be subject to an audit every quarter and can be fined if it fails to meet the standards listed under the contract. Some of the standards include completing a physical exam and mental-health assessment of all prisoners within two days of their arrival; completing referrals to a physician within seven days; maintaining adequate medical records; and developing re-entry plans for mentally ill inmates at least 30 days before they’re released.

“I believe the improvements will be in efficiencies where there will be less prisoner movement and efficient flow of services. Wexford will also be updating our medical equipment,” said Kavanagh. “The contract has provisions for close monitoring by the Department of Corrections staff. We expect this program to run smoothly, but if it doesn’t we can correct problems and always go back to public providers.”