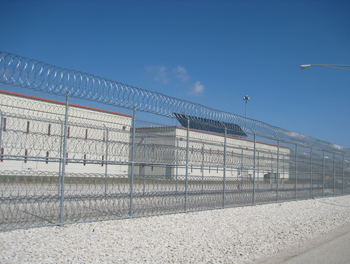 With approximately 2,000 inmates on a 350-acre property, the maximum-security Wabash Valley Correctional Facility in Sullivan County, Ind., used a lot of hot water. The Indiana Department of Correction (IDOC), which runs the facility, already had a “great emphasis on going green,” according to Rick Larsen, director of communications for Wabash Valley, and since the facility had an annual $38 million budget, “anything we can do to help improve our efficiency and lower costs, the better.”

A solution was waiting for them in Indiana. In 2007, after close to two decades as an established plumbing company, Mann Plumbing & Solar of Bloomington, Ind., thought solar hot water would be “a natural progression,” says David Mann, president and founder.

When people think of solar energy, some may imagine solar photovoltaic cells. Solar heating panels are different than these types of cells, but all systems work on the basic principle of converting solar radiation, or sunlight, into heat. First, solar water is collected, through rooftop panels heated by the sun. The liquid, food-grade antifreeze or water transfers the heat to storage tanks that feed heated water into the conventional hot water system. A properly designed and installed solar water heating system can provide 40 to 80 percent of a building’s hot water needs, according to the Solar Energy Industries Association.

Mann had told his state representative, Matt Pierce, about the solar thermal technology, and Pierce passed the word on to Kevin Orme, director of construction services for the Indiana Department of Correction.
The IDOC and Mann Plumbing & Solar decided to start with a pilot installation of solar hot water panels, where the hot water would preheat water for inmates’ showers.

They chose 200-inmate, 27,000-square-foot Block P, one of five identical cell houses on the property. The facility spans an approximate total of 725,000 square feet.

The company installed fifteen 4-by-10 foot Caleffi Hydronic Solutions panels. Demand for hot water could drop for days at a time if the facility was on lockdown, so panels could potentially overheat. The team therefore decided to install a drainback solar-heating system, which drains water from the panels when not in use. The water is preheated as it runs through the array of solar panels, to a 55-gallon tank in the mechanical room and finally through a booster heater into the building’s original 700-gallon storage tank. The water in the tank averages 160 degrees to 180 degrees — plenty hot enough for the showers, which require 100- to 120-degree water.

While Mann Plumbing & Solar officials typically consult with a local engineer for some calculations, they design, build and install their solar heating projects on their own. The installation was done in winter with a crane that lifted the concrete structure onto the two-story building’s roof.

Since the installation was Mann Plumbing & Solar’s first in a correctional facility, the setting posed some challenges. All of the materials had to go through security, Mann said, and “everything that you take in had to be itemized on a ledger sheet. It was a real different experience for us,” said Mann.

To minimize the time spent bringing materials through security, the materials were pre-manufactured, assembled and numbered at the shop, then re-assembled on the facility’s roof.

Eneref Institute, a leading research and advocacy organization in green technology, conducted a survey last year of the long-term performance of installed systems. The survey was based on case studies of commercial and residential systems that were in operation for more than two decades. The results found that properly designed solar heating systems can continue to operate and perform well for more than 25 years — well past the payback period.

In addition, a more efficient shower system was installed at the facility to maximize the benefit of the solar heating installation. The new system both lowers water output and automatically shuts off the water after four minutes. 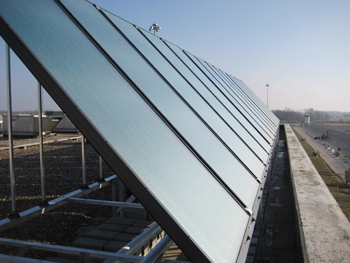 Prior to the solar heating system, the prison only used natural gas for heating water. Since all of the buildings’ natural-gas uses had been measured on the same meter, individual meters were attached to Block P and another identical cell house after the installation to measure the system’s success.

For on-demand performance information, a Caleffi web-based monitoring system was also installed. Mann Plumbing & Solar officials said they weren’t able to access the data because of firewalls, but facility personnel can see the system’s performance online.

Roger Dagley, the physical plant director at the Wabash Valley Correctional Facility, estimated that the panels provide about 40 percent of the building’s hot water needs. In August 2011, the building with the solar system used about 1,000 mBtus less than the comparison cell house each day, even after the improved shower systems were installed in both buildings.

“We can pretty much look and see that we’re staying consistent,” Dagley said. “We’re using less gas in that one house that’s got the solar system than we are in the other house.”

Since the system costs $70,000 and saves an estimated $7,000 per year, Department of Corrections officials say the system will pay for itself in 10 years — and keep on saving. But payback period will be cut dramatically once natural gas prices rise, as reported by Eneref Institute in March 2012.

Dagley admitted that he had concerns before the project was installed: “I don’t want to say that I was skeptical. But like anybody else, I would hate to see something come in and then not work.” But the system’s immediate energy savings made him a believer “from the time this started,” he said. “I’m convinced in the system. I’m convinced that it does work.”

“We want to go ahead and continue with this,” possibly with a different system for comparison’s sake, Dagley said. He added, “If we end up with the same effects on that or better than what we have got up there now, then I have a feeling that they’re going to go full-steam ahead to try to get them on all the houses.”

Coryn Wolk is an editorial researcher with the Philadelphia, Pa.- and Nairobi, Kenya-based Eneref Institute, a research and advocacy organization that promotes the benefits of sustainable development worldwide.