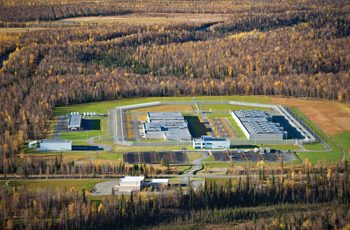 The Matanuska-Susitna Borough and the State of Alaska Department of Corrections, as owner and operator, respectively, brought online the new medium-security Goose Creek Correctional Center (GCCC) under budget and ahead of schedule, thanks to design-build delivery and collaboration.

Moreover, the project received the highest national award, in the correctional facilities category, from the Design-Build Institute of America for 2012.

“The project was designed and constructed in less than three years, a testament to the high level of process organization and communication skills achieved, and to how a large, top-quality project can be produced on time and within budget through a D-B approach,” said Projects Administrator Gary Donnelly of Neeser Construction Inc. (NCI). The project was ahead of schedule by approximately four months.

The 1,536-bed correctional center for long-term male felony offenders is sited in a rural area 75 miles northeast of Anchorage. Driving to the site during the winter months requires dealing with snow and ice conditions, long hours of darkness and frequent encounters with moose on, or crossing, the roads.
Alaska has a short construction season compared to the rest of the country; things are usually in-closure, or enclosed, due to the weather by mid-October, when workers battle heavy snow and wind. The long winters and exceedingly short summers, which are routine in Alaska, did not deter the construction team’s construction window, which is limited by the hours of daylight and months of below zero temperatures, in terms of schedule or cost.

“We have to get the buildings enclosed as quickly as we can and try to beat the winter weather,” said Donnelly. “The first season we got in the ground in May 2009 and we had four buildings enclosed by the end of October or mid-November of 2009. It would have never happened without design-build.”
“NCI, the different design firms, and the folks from the DOC, and their consultants, established a tremendous working relationship that allowed the project to move forward in a way that made sense,” said Donnelly.

“The design revolved around the needs of the Alaska DOC. There was a lot of work that went in, as a collaborative team, which helped keep the project on schedule and on track,” said Donnelly. “Which up here in Alaska is a critical issue.”

In addition to the Alaska-based architects and engineers, there were additional AE firms involved in the project from Washington, Colorado, Texas, California, South Carolina and Nevada —comprising a 40-member D-B team from 14 different AE firms, seven contractor/subcontracting companies, and a 12-person owner team with design professionals for each discipline.

On the occasions where travel to Anchorage was not practical or possible, participation was achieved through the use of virtual meeting software, and large-screen projections of drawings and diagrams, for real-time discussion and evaluation.

The design strategy was based on paralleling the construction schedule, which began with the support visitation building because it was the most challenging of the five structures, and it contained the central boilers and ventilation units for the entire prison campus.

“This allowed all buried utilities, and the HVAC system serving all [five] buildings, to be constructed in the first year, along with enclosure of approximately 190,000 square feet of the most complex building on the campus,” said Richard M. Reed, project architectural lead and principal at KPB Architects.
Design proceeded to complete outside administration, warehouse, vehicle maintenance and general housing buildings in phases to dovetail with the construction schedule. Peak activity on site had four buildings and related sitework under construction simultaneously. Construction of general housing was begun and finished in the final year, along with landscaping the entire campus.

The entire prison campus was designed and built in less than three years, “which we feel quite proud of, and there is three winters in a period like that,” said Reed. “We are driving winter or summer and negotiating all of the challenges that frequent any project in Alaska. This one was a huge one.”
At its peak, the project had nearly 450 trades people on site at any given time and cumulatively employed more than 1,200 construction workers.
RISE Alaska was the representative for the Matanuska-Susitna Borough and was on-board from start to finish with several people on the site at one time.
“This was one of the largest vertical construction projects that’s ever taken place in Alaska,” said Purchasing Officer Russ Krafft at the Matanuska-Susitna Borough. “It’s like building an entire university campus at once.”

“We were in the ground early,” said Krafft. “There were zero claims on the project.”

GCCC is comprised of five primary buildings. The two largest buildings, general housing and support visitation, are adjoined by a 250-foot by 1,000-foot movement yard and bounded by a secured, perimeter double-fence. The movement yard provides secure circulation between the two buildings and includes ball fields and courts for outside recreation. Indoor recreation facilities include two gymnasiums and exercise rooms centrally located in general housing.

Academic and vocational education programs, the central kitchen and dining facilities, segregated housing, and visitation functions are located in support visitation. The three smaller buildings located outside the secured perimeter fence include a multi-bay vehicle maintenance shop, a high-stack warehouse, with five-weeks storage capacity for dry and refrigerated foods, and the publically-accessible outside administration building to process visitors, train and exercise staff, and to house the master control tower. The outside administration building gets its name from its siting outside the secured perimeter, while inside administrative facilities are located in the general housing and support visitation buildings as well.
There are three dining halls with 250 seats, each. All inmates coming from general housing, plus staff, are fed in two 20-minute shifts. A secure corridor connects the food service area, which is located in the support visitation building, to the segregated housing units.

The RFP established an energy goal of 20 percent greater than ASHRAE 90.1-2004. NCI targeted a goal of exceeding the referenced ASHRAE standard by 30 percent. The as-built result fell between the two goals.

The general housing project needed to be concrete on both the interior and exterior of the exterior wall — an insulated sandwich panel of eight inches of concrete, four inches of core insulation and four inches of concrete on the inside, explained Reed. “It was a massive —16-inch thick wall.”
Glazed CMU wall is used in the shower areas because of its low maintenance cost in terms of paining and repairs. Low-flow showerheads and urinals were installed. Waterless urinals were not considered due to sanitary concerns.

Willoughby calculated an estimated $350,000 in security plumbing fixtures were installed in the medium-security facility.

Ozone water treatment technology is implemented in the prison laundry. The treatment for water is similar to UV treatment for air; it kills bacteria and germs such that hot water is not needed. Ozone utilizes cold water, which eliminates the water overheating process and saves gas usage, and uses less water per cycle. It also reduces the wear and tear on fabric.

In areas, such as Alaska, with significant months of snow-covered ground, the ground surface, or snow, has a high-reflectivity, and requires significantly less light fixtures to accomplish the same lighting levels. The number of light fixtures, on site, is appropriate number for non-covered ground, but control of some of the lights to be turned off during months of snow-cover, can be managed in the security control console in master control.

If there ever was a power outage, the facility is prepared. Reed explained they have two to three weeks of emergency power; a huge array of generators, and on-site fuel storage, both diesel and natural gas. If there is a crisis, inmates and staff will have water, fuel, heat, electricity, and food for two to three weeks.

“It is really a community,” said Reed. “It is almost self-contained.”

The project was financed by the sale of revenue bonds that will be repaid by the state through 25 annual lease payments. Borough taxpayers are not paying for the project.

The new correctional center doubles the number of available beds in the State of Alaska Department of Corrections in-state system and also provides overflow capacity for un-sentenced prisoners from local pre-trial facilities.

The award will be presented at DBIA’s annual conference in New Orleans on Nov. 7-9, 2012.

“There have been representatives from other facilities in the country that have visited GCCC and they give it very high marks,” said Steve Fishback, AIA, who served as the architect for the State DOC. “We think the quality is very high and are proud of the end product.”

Donnelly could not agree more and said “we met and more often exceeded the State’s quality expectations.

“The craftsmanship is spot on. By correctional standards, it is a very nicely done facility. The operator could not be happier and the Borough is happy too because it came in within the numbers it needed to come in at.”

Being received ahead of schedule gave the State of Alaska DOC more time to acclimate their staff and get ready for business.

The State is undergoing a very soft, slow ramp-up. Prisoners began arriving in July 2012. As of Sept. 25, the facility held just under 300 inmates. According to the Borough’s website operations phase-in will continue until October 2013 and it is anticipated that full occupancy will occur in fiscal year 2014.
Officials at the State of Alaska DOC declined to be interviewed for this article.