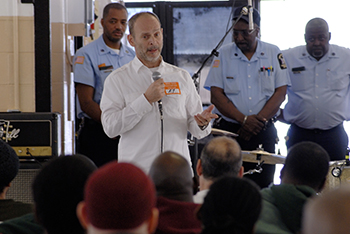 Named one of the “Top 100 Guitarists of All Time” by Rolling Stone magazine, Wayne Kramer’s youth was spent at the zenith of rock ‘n’ roll, political controversy and drug addiction as a member of Motor City 5. As the band deteriorated in the early 70s, Kramer’s struggle with drug addiction continued to spiral even after the glamor had faded. His addiction landed him in Lexington Federal Prison after attempting to sell cocaine to an undercover officer in 1975.

During his time in prison, Kramer found personal refuge through musical expression.
“When I was studying music I wasn’t in the culture of prison anymore, I was in another world,” Kramer said. “It was a world of scales and rhythms and melodies, but it was also a world of communication with my fellows.”

“Prisons generally are worlds of despair, defeat, racism, violence and failure, and art is something that stands in opposition to that,” Kramer said. “My experience in prison was that this place kept trying to remind me that I had no value in the world, that I had been thrown away. Creating something is a great argument against that valuelessness. It says I am somebody; I have created something of beauty.”

After his release more than two years later, Kramer continued with his career and inspired a song written by The Clash in 1978.

“Let me tell you ‘bout Wayne and his deals of cocaine
A little more every day
Holding for a friend till the band do well
Then the D.E.A. locked him away.”

Inspired by the song’s title “Jail Guitar Doors” and moved by a concert performed at the Sing Sing Correctional Facility in New York, Kramer co-founded the organization Jail Guitar Doors USA in 2009.

The ability to create music within the correctional system has far-reaching and therapeutic impacts for inmates and creates great change in the prison environment, Kramer said.
“From our experience in the prisons, when we can get a guitar in an inmate’s hands and directly challenge him or her to write a song and tell their story in that song, it will transform them,” Kramer said. “They will start to see themselves and their relationship with the world differently because music and art are one of the only processes we know that allow one to express themselves positively in a non-confrontational way.”
Jail Guitar Doors has found that arts in corrections programs reduce recidivism by about 60 percent, Kramer said. Music also allows relationships inside the correctional facility to be more peaceful, as inmates are able to connect on a very human level through music. Wardens have reported to the organization that since the introduction of musical instruments, the atmosphere in the yard has transformed, Kramer said. While education is extremely important for inmates, Kramer said, music provides inmates with a deeply personal form of expression.
“If we just educate a criminal, we have an educated criminal,” Kramer said. “What we have to get to is a change of heart, something deeper, more fundamental.”
Kramer was honored by the organization California Lawyers for the Arts (CLA) at The Sixth Annual Artistic License Awards in recognition for his work with Jail Guitar Doors USA.
“The arts are rising to the occasion to address a really important challenge,” said Alma Robinson, executive director of CLA.

Not only does introducing instruments encourage the emotional development of inmates, but it also allows the state to save money through reduced recidivism, Robinson said. With the severe cuts in arts in corrections, Robinson said it was important to recognize those who continue to provide California inmates with artistic expression.
Others honored by the CLA included senators Carol Liu and Alan Sieroty, attorney Catherine Emanuel and the Intel Corporation.
For Kramer, the ability to provide music to the nation’s incarcerated population is the ability to provide an inmate with the beginnings of personal fruition.
“It begins a transformation so the person starts to see themselves differently,” Kramer said. “They start to see themselves as an artist, not just as a number, a bed, a guy who always messes up, but they see themselves as someone who can contribute something to the world.”