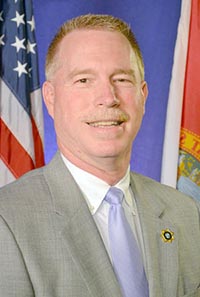 TALLAHASSEE, Fla. — After two years and a flurry of controversies, Florida Department of Corrections Secretary Michael Crews will resign at the end of the month. Following the resignation announcement, Florida Governor Rick Scott appointed Tim Cannon, a more than 20-year veteran of the department and its current deputy secretary, to serve as interim secretary.

Under Crew’s leadership, the Department of Corrections has been plagued by reports of abusive behavior by correctional officers, budget issues and allegations that the department specifically targeted whistleblowers. Crews had worked to repair the agency by firing errant correctional staff, developing new operational and treatment standards, and urging the state’s Department of Law Enforcement to investigate more than 100 unresolved inmate deaths, according to the Sun Sentinel.

Crews’ run as secretary was also punctuated by several high profile events including the death of a mentally ill inmate who was reportedly forced into a scalding shower by facility staff as punishment, the discovery that a number of prison staff at the Taylor Correctional Institution in Perry were complicit in inmate gang activity, and an inmate riot at the Suwanee Correctional Institution in Live Oak in October 2014 which injured several correctional officers.

Additionally, Crews inherited a department grappling with approximately $120 million in debt and a mountain of litigation over health care privatization. His plan to cut costs by putting some of the state’s 100,000 inmates to work creating the products such as soap and clothing made a dent in the deficit but was not able to close the gap.

Despite these efforts, Crews was also sued by several corrections investigators who raised the issue of inmate abuse and claim they were subsequently retaliated against for putting the department under increased scrutiny. The suit followed the investigation into widespread misconduct at the Franklin Correctional Institution in Carrabelle, Fla., which uncovered evidence that an earlier inmate death investigation was “false and misleading.”

Crews is the third Department of Corrections head appointed by Gov. Scott to step down. Though Crews’ predecessor and mentor Ken Tucker relinquished his position as part of the state’s retirement program, Gov. Scott’s first appointee, Ed Buss, was forced to resign after butting heads with the governor over contract issues and a failed attempted to privatize the department, reported the Sun Sentinel.

Prior to being named secretary, Crews served as the department’s deputy secretary for one year, and held various corrections and law enforcement positions. He served with the Florida Department of Law Enforcement as director of the professionalism program, chief of bureau standards and as the director of Florida’s Criminal Justice Executive Institute/Leadership Center. He began his career with DOC where he was a probation and parole officer from 1986 to 1987 and correctional officer from 1984 to 1986.

Announcing Crew’s appointment in December 2012, Gov. Scott said, “Throughout Michael’s impressive career, he has demonstrated an excellent understanding of law enforcement and a willingness to serve the citizens of Florida. I am confident Michael will lead the Department of Corrections with integrity, leadership, and with an understanding of our ultimate goal to keep Floridians safe.”