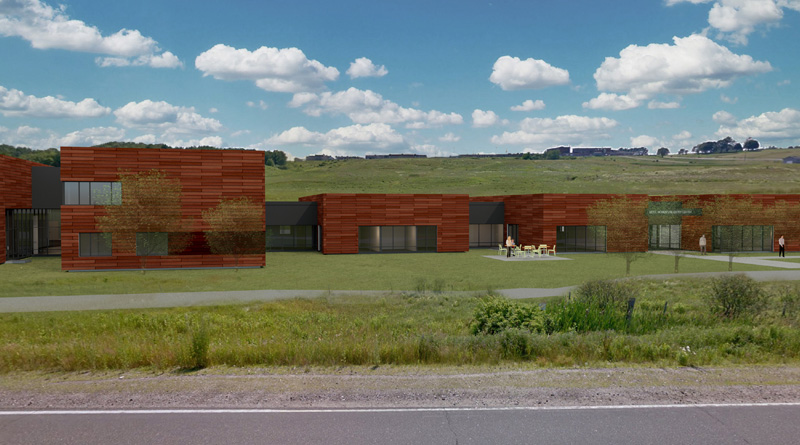 WINDHAM, Maine — The Maine Department of Corrections (MDOC) opened the doors to the new $10 million Southern Maine Women’s Re-Entry Center in Windham on March 8. The facility will cater specifically to inmates within two years of completing their sentences to help ensure a successful community re-entry process. The re-entry center was designed to replace the existing 64-bed re-entry facility located in Alfred, Maine, which the department leases.

Pulitzer/Bogard & Associates LLC of Lido Beach, N.Y., and SMRT Inc. with an office in Portland, Maine, completed the project’s feasibility study in February 2015. That study concluded that the reentry center would provide a positive economic benefit to the state and enable MDOC to do “more with less.” The team also found that alternatives to constructing the reentry facility would be more expensive and that the project would positively realign the system capacity. The MDOC also hosted a series to public information sessions in early 2015 seeking public input on the project after state legislators requested great transparency on the project.

Landry/French Construction of Scarborough, Maine, constructed the 21,500-square-foot facility — which includes a variety of inmate classification options across three medium-security units — on a previously undeveloped 108-acre parcel owned by the MDOC. The parcel already includes one other correctional facility as well as a new 40-space parking lot and delivery loop.

Inmates at the new Southern Maine Women’s Re-Entry Center will participate in employment readiness training, substance abuse treatment, financial management classes, and more, including both high school and college-level courses that will be made available. Additionally, the center will offer a culinary arts program and computer skills-building classes. Women at the existing re-entry center have also participated in community service projects such as therapy dog training, grounds maintenance, and volunteering in local community agencies. Additionally, SMRC works closely with the Maine Department of Labor Career Center to place inmates in re-entry programs in jobs in high growth/high demand careers where employers have need of good employees. Residents will be able to keep these jobs after their release, according to the MDOC website.

“Ideally we’d like to say that we don’t need prisons,” Gov. Paul LePage said at the grand opening ceremony, as reported by local news outlet WGME. “But if we’re going to have prisons, this is the type of prison that we need to try to help people to leave the establishment and never to come back.”

WGME reported that the Maine Department of Corrections will now turn its attention to a large-scale expansion of the Maine Correctional Center, also located in Windham. The state will invest an estimated $150 million into improving and expanding inmate treatment programs. Work on that project should be completed between 2020 and 2022.