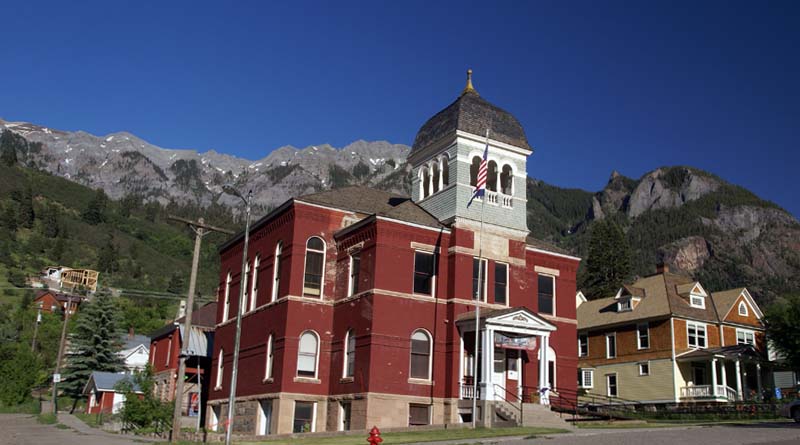 OURAY, Colo. — The Ouray County Courthouse is currently undergoing construction and restoration work that will bring the historic building into the 21st century.

The Ouray County Courthouse was completed in December 1888 for the sum of $22,336. Before the courthouse was deemed officially completed​, an additional $13,000 was needed to install heating and furnishings. Most of the furnishings are still in use in the courthouse, including desks, safes, and vaults. The courthouse is listed as a National Historic Structure under the umbrella of the Ouray Historic District on the State of Colorado Registry (History Colorado).

The courthouse features richly decorative detailing common with Italianate, Romanesque, Queen Anne, and early Classical Revival architecture popular in the late 1800s. It has a rich and storied history, including being featured in the 1969 John Wayne Film “True Grit.” In 2016, the courthouse was profiled by the PBS docuseries “Colorado Experience: Courthouses.”

In August of 2015 Charles Cunniffe Architects (CCA) performed an initial site visit and meeting with the county to evaluate the current county needs and conditions of the Ouray County Courthouse. In April of 2016 the masterplan and feasibility study commenced. The Masterplan and Feasibility Study includes the Ouray Courthouse, Historic Jail building, and the one-story Annex building to the north currently housing the County Assessor’s offices and all associated property. The scope of the project includes assessments and recommendations for civil and landscape, architectural, interior planning and building utilization, structural, mechanical, plumbing and electrical.

Prior to this current master planning effort, the Ouray County Courthouse had undergone four previous assessments by CCA: in 1995, 1997, 2001 and again in 2003. The limited outcome of the prior studies resulted in a full window restoration in 2002, and the addition of a connection link and elevator between the courthouse building and historic jail in 2008, with minor restoration to the courthouse masonry. In addition, a new boiler was installed in 2009 replacing a 1964 fuel oil boiler.

During the summer of 2018, all courthouse offices relocated to temporary locations. A general contractor, FCI Constructors, Inc., was hired through a request for proposal process, and worked to finalize building plans and pricing.

In January 2019, the Board of County Commissioners entered into a Guaranteed Maximum Price (GMP) Amendment for the project with FCI Constructors in an amount not to exceed $8,017,695.

Restoration and construction work began on Feb. 1 and a formal ground-breaking ceremony was held on Feb. 14. The project is slated for completion in March 2020.

According to Charles Cunniffe Architects, the phased project involved the restoration of the historic courthouse and adjacent jailhouse, adding a contemporary infill lobby between the buildings with a new staircase and elevator. The interior of the courtroom, jury room and judges quarters, county clerk offices and various other county offices were extensively re-designed and remodeled. The jailhouse was converted into the county sheriff’s offices, training rooms, and evidence vault.