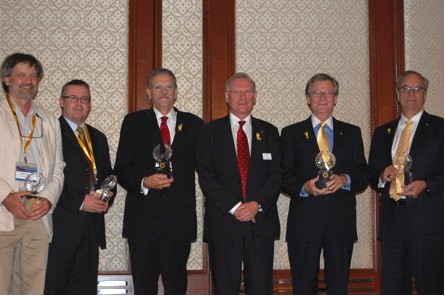 SINGAPORE — While typically awarded to an individual, the International Corrections and Prisons Association (ICPA) awarded a team of planners, architects and contractors from the U.S., Canada and New Zealand who worked together for 18 months to produce a scheme for a rapidly deployable prison.

The award, given out at the association’s 13th annual international conference in Singapore in September, was presented by the President to recognize the group for “significant work that fosters the core values of the association,” according to officials.

The ICPA is the largest international association of correctional officials in the world with a membership representing more than 90 countries.

The conference hosted about 500 delegates, where they discussed the program theme of “unlocking the second prison.”

The request for a prison that could be operational within six months following a conflict or natural disaster originated from the Department of Peacekeeping Operations of the United Nations (UNDPKO).

The companies of the team members supported the efforts of these professionals by donating time and travel expenses at no cost to the ICPA or the UNDPKO.