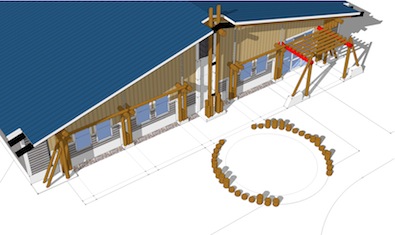 Midway through the schematic design for the new Nisqually Public Safety Complex, I experienced a “wow moment.” I realized that our client, the Nisqually Tribal Police and Corrections Departments, practiced a remarkably successful form of restorative justice. The Nisqually form of restorative justice fuses traditional cultural values of spirituality, family and community with a highly respected and modern system of justice. Rather than a system designed to punish, it’s a form of justice designed to restore victims, offenders and their families. Listening to our client, our firm’s understanding of how native culture can positively influence justice and justice architecture grew immeasurably. Non-tribal communities should take note. The Nisqually Tribe and other native communities have much to offer towards improving how justice is administered in America.

Successful Restorative Justice is a Natural Extension of Culture

For industry professionals, the term “restorative justice” is used to describe an approach to justice that focuses on the needs of victims, offenders and community — instead of primarily focusing on detaining offenders to collect on a debt to society. The goal of restorative justice is to restore victims and empower offenders to become productive members of the community, and ultimately to, reduce recidivism.

It is a worthy goal, and with widespread public discontent of justice in America, one deserving our collective attention and support. While working with the Nisqually Tribe, it became clear that restorative justice was a natural extension of their culture. It is a culture that places high value, even a spiritual value, on family, with emphasis on elders and community. These values promote respect and responsibility that extends beyond the individual or offender and into the community. In the case of the victim and the offender, the community becomes involved as part of the restorative process because it is a natural part of the culture. As their architect, our role was to listen and design a project that facilitated the tribe’s success at restoring victims, offenders and their families to becoming stronger community members. It became an enriching and educational process for the design team. Once we understood the process, culture and programs, we could then design spaces within the facility to promote communication and the opportunity for healing.

The self-governing Nisqually Tribe has provided a full range of public safety services to its members for hundreds of years. In its modern, more recognizable form, the tribe has been serving its members, other local tribes and the surrounding local community through the operation of a 90-bed correctional facility for more than 10 years. Not unlike most native communities, the Nisqually express a much higher level of satisfaction by managing their own public safety programs. Neighboring tribal and non-tribal justice officials have recognized the restorative and financial benefits of the existing Nisqually facilities and have participated through leased bed space arrangements.

Nisqually Chief of Police and tribal member Joe Kautz, is the visionary behind the tribe’s effort to improve and expand their services with the development of a new Public Safety Complex. Initial planning efforts by Kautz and tribal planning director Joe Cushman, were rewarded with a $10 million grant through the Department of Justice (DOJ). DOJ recognized the value of the project as a regional facility that could meet the needs of several surrounding tribes, as well as non-tribal communities in need, at a substantially lower cost to the public. The tribe has prepared a business plan that projects costs at approximately $75 per correctional bed, per day, which neighboring communities recognize as a bargain compared to their own costs per bed.

The proposed project, the Nisqually Public Safety Complex, includes a new 288-bed minimum-security regional jail with police, fish and wildlife enforcement department offices. Tribal planning also included provisions for a future fire station, courthouse, and other related commercial development on the master planned public safety complex site. Site preparation for the complex, including major utility installations, is complete. Building construction was scheduled to begin in early 2012. The estimated $20 million project cost is to be funded through a combination of grant, loan and tribal contributions.

According to Kautz, the public safety complex will provide nearly 100 jobs for tribal and non-tribal individuals alike and provides a positive economic boost to the local community both during construction and operation. Kautz is passionate about the importance of the project to provide jobs and career development for younger tribal members in the fields of public safety and social services. He also sees the project as a unique opportunity to blend powerful tribal justice paradigms with a fully compliant modern justice facility. For over a decade, operating out of mostly sub-standard facilities, Kautz has maintained a superlative safety record and overseen countless personal stories of restoration. All provided at a substantially lower cost per inmate than comparable surrounding communities.

The Nisqually justice paradigm taught by Kautz focuses on offender accountability to the community, victims and family. The paradigm engages the offender and employs the efforts of community volunteers, families, spiritual leaders and tribal elders in a restorative process. It is a process, for those willing, that results in the repair of those wronged, and the welcoming of the offender in a productive role back into the community. It is a process that demands hard work by staff and relies on volunteer efforts. Kautz emphasized that when a member strays on their path of life, it is up to the community to work together to get them back on track.

“We are not separated from — we are part of the community,” says Kautz. He also points out that the same level and opportunity for services is extended to both tribal and non-tribal offenders. Tribal corrections staff have developed strong relationships with non-tribal social service agencies for re-entry transitioning. The State of Washington community corrections managers are regular participants in tribal sessions for training and information sharing. The partnerships are an important part of the restorative success of the Nisqually system for both tribal and non-tribal victims and offenders.

As their architect, we understood that federal funding required the project be designed according to the Bureau of Indian Affairs (BIA) Standards for Adult Correctional Facilities. The tribe wanted a design that was supportive of their restorative justice system. Peter Krasnow, a justice facilities architect with Justice Solutions Group of New Jersey, provided peer review of the KMB design for the project and was instrumental in coordinating technical compliance reviews and gaining BIA approval of the final design. Key to his role was gaining project approvals without sacrificing tribal-requested elements to promote restorative justice. The tribes’ justice committee had requested spaces for counseling, spiritual exercises and family visitation at strategic locations throughout the facility.

Prominently located at the point of entry, the tribe had requested a healing circle where offenders would be welcomed back into the community. Tribal social services assist with re-entry programs geared to provide opportunities for employment and involvement in healthy community-based activities.
Significant square footage within the detention component was planned for family visitation. Kautz was pointed out that family visitation was critical to the restorative nature of the Nisqually system of justice. Kautz shared statistics from a California study showing that inmates who received family visits were far less likely to re-offend. In addition to contact visitation, the tribe also plans to provide the opportunity for an electronic visitation to those families that are unable to visit at the complex.

Over the first few months of design, we witnessed the existing Nisqually system of justice in action — offenders cutting firewood for distribution to tribal elders, providing public road and landscape maintenance. According to Kautz these are simple reparative acts reflective of the Nisqually cultural values and serve to teach offenders the value of community, respect for elders and the responsibility to make amends to those who have been harmed. In return, tribal elders and community volunteers provide visitation, counseling and mentorship. Kautz explains, the Nisqually regard elders as the best teachers, as they have been down the path of life, even having chosen the wrong path sometimes themselves. The Nisqually emphasis on respecting elders and recognizing their ability to impart wisdom is a key element to their restorative process for justice. Kautz is also a realist and he explains that not everyone that is obligated to stay at his facility is ready for change.

“Not everyone is prepared to make the decision to choose the right path. For those that are, we provide the roadmap.”

Most public safety professionals support the principles of a restorative system of justice. The Nisqually tribe and native communities throughout North America have understood and practiced a successful form of restorative justice for hundreds of years. Central to this success is a set of cultural values: Respect for elders, respect for families, community responsibilities, family responsibilities and spirituality. The community benefits of the restorative model include lower costs for policing, courts, detention, and ultimately, fewer victims.

In short, restorative justice holistically provides positive opportunities for the entire community. The leadership of Nisqually’s Chief Kautz and his staff provide inspiration and hope for restoring those who have been harmed, and change for those who have offended.

The project groundbreaking ceremony was attended by many tribal and local government leaders, Nisqually spiritual leader, Robert (Bob) Sison, blessed the site: “This is holy land, may all who construct, work and be detained in this facility be blessed by our creator.” So far, his blessing is working.