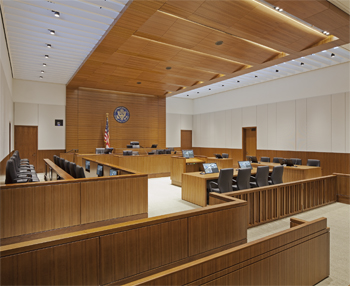 With green technologies such photovoltaic panels, solar hot water system, LED lighting, maximum use of daylighting, and protective shading — energy consumption is expected to be reduced by 45 percent relative to a comparable building.

The 33,400-square-foot courthouse was originally designed to achieve a Leadership in Energy and Environmental Design (LEED) Silver rating, but with additional innovative design elements now incorporated, the courthouse is on track to achieve LEED Gold status.

The design-build team consisted of Gilbane Building Co. and NBBJ, who were able to “deliver this sustainable courthouse in less than 31 months, and $2 million under budget,” said Ruth Cox, GSA regional administrator. “This courthouse is the first GSA Design-Build-Design Excellence project awarded through a fixed-price design competition selection process.”

The climate in the Central Valley of California served as an inspiration to the design team.

“Our approach has been to create a place for the people of Bakersfield that makes justice accessible,” said Architect Steve McConnell of NBBJ. “The Central Valley’s climate and landscape is a big inspiration to the design, as was the building’s site adjacent to Central Park. It was also important that the building take care of the environment by reducing energy and water consumption, and by integrating daylight throughout the space.”

The courthouse is located in Bakersfield’s Civic Center and houses the U.S. Magistrate Court, U.S. Probation and Pretrial Services and U.S. Marshals Service.

The federal courthouse had a great impact on the community during its construction. More than 650 jobs were created and construction crews spent up to $200,000 per month in the local community.