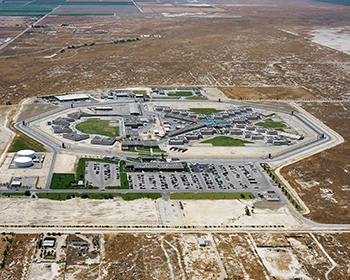 SACRAMENTO, Calif. — In order to meet a federal court-mandated deadline and evade being held in contempt, Gov. Jerry Brown filed a new prison plan late Thursday night that aims to reduce overcrowding in the state’s prisons over the next year.

The California governor has been vocal about his belief that a new plan is futile, as the prison population has decreased by 43,000 inmates in the past six years. The courts demanded the California inmate count be reduced to about 110,000, or 137.5 percent capacity, to ensure adequate medical and mental health care to inmates.

Brown, along with Jeffrey Beard, secretary of the California Department of Corrections and Rehabilitation (CDCR), have said the plan was provided to courts reluctantly and “under protest.”

“The plan is ugly, we don’t like it,” Beard said. “But considering the inmates we have left in our prison population, it’s the best plan we could come up with.”

The CDCR was asked to provide a list of possible reduction solutions and a plan consisting of those solutions. The three-part plan includes the utilization of state fire camps, inmate relocation to private prisons and county jails, and early release for older inmates as well as inmates who have received certain credits and completed programs while incarcerated.

“We provided a plan which consisted of the best of the bad options that were presented in the first list,” Beard said.

While the inmate population is currently about 9,000 inmates over the required cap, the plan provided by Brown only reduces the population by approximately 7,000.

However, Beard said, the population and capacity cap has become arbitrary because the California prison system’s medical and mental health has been transformed into the best program in the nation. Beard had said in 2008 that he believed that the state’s prisons were too congested to provide quality care to inmates but had witnessed significant changes within the department, causing him to relay a different message five years later.

“But that was then and this is now. I am speaking the truth today when I say that this is a different system. This is a system that is delivering a quality and constitutional level of care,” Beard said. “Any further forced reductions in our population are both unnecessary and unsafe.”

The demands made by the court have not been met in any other department in the nation, Beard said, and the expectation to meet those standards may result in the loss of public safety. Though the plan only allows low-risk offenders early release, Beard said low-risk does not mean “without risk.”

“The only remaining low-risk people that are left in the system are people that you might consider serious and violent offenders,” Beard said. “They are low-risk to recidivate, maybe, but still they are serious offenders and that’s the group the court would have to order the release from.”

In 2011, Brown had put into an action a realignment plan that relocated nonviolent, nonsexual offenders to county jails. Providing a significant reduction to the state’s prisons, the realignment could be in jeopardy if the court orders additional reductions, according to Beard.

With the exception of the plan to expand fire camps, which had been in place before the court order, all suggestions in Brown’s plan require legislative approval.

“These prisons are running fine at the current capacity level. These prisons are providing a constitutional level of care and we don’t believe we have to do anymore and that’s why we have not submitted a plan before this,” Beard said. “We’re only doing this under court order.”