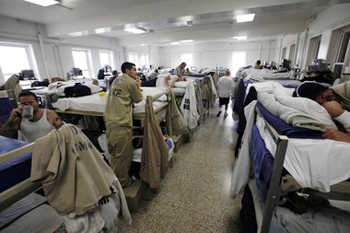 LANCASTER, OHIO — Ohio’s Fairfield County is under the microscope, again, as its three jail buildings recently failed a state inspection. The county has not passed a state inspection in 25 years. After decades of failed reviews, Sheriff Dave Phalen is saying it is time for a new facility.

One of the main problems inhibiting Fairfield County from passing a state inspection is the severe overcrowding taking place at its jails. According to Phalen, the three jails combined are supposed to hold a maximum of 133 inmates under state standards, however, they typically hold close to 270 inmates.

Two of the county jails are located in downtown Lancaster. The facilities are owned by the state and then rented by Fairfield County. The sheriff’s staff was asked to inspect the jail since the state prison department has not inspected the county jails since 2008 because of budget cuts and insufficient staffing.

County Commissioner Steve Davis, along with Phalen, weren’t surprised that the county did not pass the state inspections and hopes other officials see the problems as a wake up call.

“We’re in violation,” said Phalen in a statement to the Ohio-based newspaper, The Columbus Dispatch, “and will remain in violation until we get a new jail.”

Davis added, “It [Fairfield County jails] has never passed state inspection for 25-plus years. That is almost numbing.”

Overcrowding wasn’t as heavy of an issue when the discussion for a new jail began more than a decade ago, however, since that time the county has grown by 147,000 residents and the jails have also significantly increased, according to the newspaper.

Another reason for the growth of inmate populations include sentencing changes that divert low-level, non-violent felony offenders to local jails (instead of housing them in state prisons), according to Bob Cornwell, executive director of the Buckeye State Sheriff’s Association, in a statement. The Fairfield County Jail in particular has shown an increase in fourth- and fifth-degree felony inmates who would have gone to prison but were diverted to the jail instead because of the sentencing changes, according to a statement by Davis.

The need for the new jail is crucial, according to state officials, but 67 percent of Fairfield County disagreed back in 2005 when they voted against a tax increase that would have made it possible to build a new jail and sheriff’s office. Since the defeat, the county commissioners have not returned the issue to the ballot. However, commissioners are discussing other ways to get the jail funded, including building a bond-financed jail, where the debt would be partially paid with annual casino-revenue payments from the state to the county.

Plans that are being considered include a 440-bed jail and office space for the sheriff’s 130 employees, all in one building, according to a statement made by Davis. The plan would cost near $35 million and the discussion of building the jail in stages and adding housing pods as needed is also on the drawing board. Davis said that he hopes the county can decide on a plan this year and move ahead with firm plans by 2014.

As the jails struggle to house an influx of inmates, the failed state inspection reiterates the need for a new facility citing a solution to just about every deficiency in the jail is the “recommendation to county commissioners to construct a new jail.”