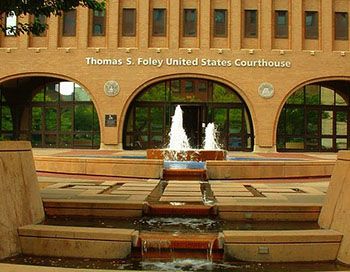 McKinstry, in a joint venture with locally based Lydig Construction, won the $42 million contract with the U.S. General Services Administration (GSA) to upgrade the 301,596-square-foot courthouse to a green building in 2009. The upgrades were necessary in order to bring the 46-year-old building’s performance levels up to modern standards.

The contract required that the building meet certain criteria during the energy verification period of August 2012 to July 2013. Because McKinstry monitored the building continually to identify energy savings opportunities and system adjustments and optimization, the building was able to achieve an additional 20 percent in energy savings. The building’s energy performance is a 50 percent reduction in baseline, pre-renovation energy consumption and exceeded the initial goal of 30 percent energy savings.

“To protect ourselves as a company, we went above and beyond to achieve those savings,” said Jared Haight, project manager for McKinstry. “The design needed to be robust and target energy savings, and McKinstry needed to measure and verify that. Appropriate monitoring systems needed to be in place to see where energy was being spent.”
McKinstry put in place meters on electrical uses, water meters and airflow measuring stations, as well as CO2 censors and occupancy sensors so they could tailor the operation and mechanical systems to meet what the occupants needed. At the same time, the company wanted to make sure that building systems were only operating when people were there, not arbitrarily after hours, to ensure the most efficient operations.
The McKinstry team completed the project while working in a fully occupied building. The tenants remained in the building during the entire job, which means they had to operate the construction activities at night and on the weekends. They also had seasonal challenges that meant they were required to have the air conditioning running during the summer and the heat during the winter. They had to schedule construction accordingly, working on the air conditioning systems in the winter months and the heating during the summer months.
“We needed to keep occupants comfortable and systems up and running while we changed out the systems,” said Warren Tastad, business manager at McKinstry.
Haight added that they couldn’t remove any mechanical systems without either having a temporary solution in place or completing the project over the weekend to ensure that they were ready to use in time for employees to use them again on Monday. “We had to get creative on how to address [these solutions], and having weekly meetings helped determine how we could do it,” he said.
In order to meet the energy-saving requirements, the project team designed and replaced 80 to 85 percent of the courthouse infrastructure. That included electrical, HVAC, plumbing and lighting systems, as well as boilers and cooling towers. The team also resealed the windows and installed more than 700 individual fan coil units and replaced ventilation. These initiatives secured an emissions reduction of 1.7 million pounds of carbon dioxide.

The Foley Courthouse project received funding from the American Reinvestment and Recovery Act, which dedicated $5.5 billion in funds to convert federal buildings to high-performance green buildings and to build new, energy-efficient federal offices, courthouses and land ports of entry. The Foley Courthouse is in the process of achieving LEED Silver certification for the building.

“Through the investments of the 2009, American Recovery and Reinvestment Act, we now have a courthouse that meets GSA’s high performance green building standards and will be an asset to the community and the American taxpayer for years to come,” said George Northcroft, GSA’s Northwest/Arctic Region regional administrator, in a statement.