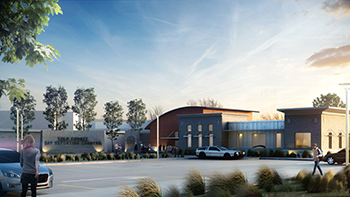 WOODLAND, Calif. — Plans are underway for the expansion and update of Yolo County’s Monroe Detention Center in Woodland. San Francisco-based Lionakis is serving as the architect on the project, and several drafts have already been designed.

The county has several goals for the project, said Mindi Nunes, assistant county administrator for Yolo County. One includes building a new Day Reporting Center (DRC) specifically designed to meet the needs of the detention center. It will be built in a way to resemble a more businesslike approach than the detention facility as well as incorporate classrooms to provide space for the county’s growing number of programs and services.

“The DRC is utilized to provide a wide range of services to individuals on probation,” Nunes said. “Services range from training and education to treatment to social services.”

The project would also increase the number of mental health and health bed space. There are currently three beds available for in-custody individuals experiencing health and mental health issues, according to Nunes. The interior modernization will increase the number to 24 beds specially designed to meet the changing needs of the detention population.

The bed addition provides more room for injured inmates who have been confined to their cells due to injuries and allows medical staff going to those cells to stay in the medical unit. The new design also focuses on separating inmates with airborne illnesses from the general population, reported the Daily Democrat.

The project would also modernize the kitchen facility to accommodate the number of meals served and incorporate a classroom for the staff to train in-custody individuals on food preparation.

Another part of the project will be the addition of a video visitation system that would increase opportunities for family visitation because individuals will not need to travel to the facility every time they want to visit their in-custody family members. With any modernization there will be technology upgrades as a result of improvements over time, Nunes added; however, video visitation is the most visible new technology.

The county was awarded $36.29 million in jail construction funds in 2014 to expand the Monroe Detention Center. The funding was a result of the second phase of Assembly Bill 900, which funded nearly $603 million in financing to help with realignment. In total, the construction will add 32 beds.

Designs are scheduled for confirmation on July 13, and preparation for construction documents will immediately follow to be approved in December, according to the Daily Democrat. The plans and other documents would then be submitted back to the Board of State Corrections in February with a goal of issuing a Request For Proposal for construction to be authorized in April 2016. Construction would formally start in July 2016 and continue through July 2018 if everything goes as planned.