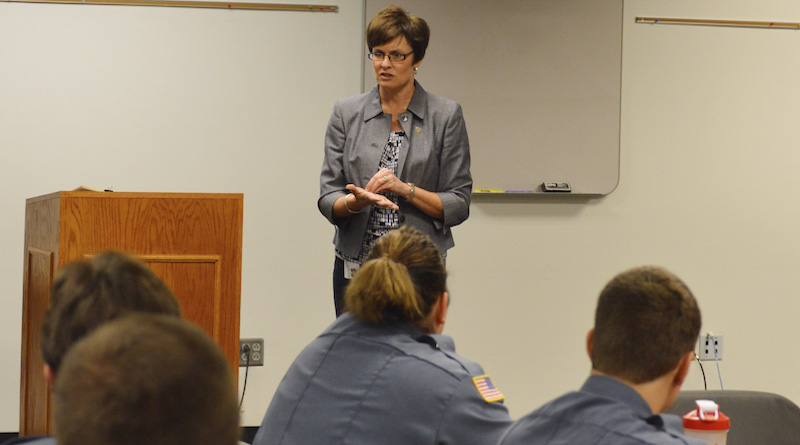 Precythe speaks to corrections employees during a graduation ceremony at the Central Region Training Academy in Jefferson City, Mo. Photo Credit: Courtesy of the Missouri Department of Corrections

Anne Precythe, the new director of the Missouri Department of Corrections (DOC) as of December 2016, developed a passion for corrections work shortly after college. As a newlywed living in rural North Carolina, Precythe was encouraged by her father-in-law to spend a day with a local probation officer to see if the career might appeal to her. It did.

After earning a degree in psychology from the University of North Carolina at Wilmington, Precythe spent 10 years as a probation officer before taking an interest in the power of data. “I took a move to the computer side of what we do and really got involved in helping managers understand what data meant,” Precythe said.

From there, she sought positions and opportunities to move the department toward greater operational efficiency. She was an early advocate for shifting from paper filing and recordkeeping to a computer-based system, and tackled learning the parole process.

This variety of experience and eagerness to accept a challenge prepared Precythe well for leadership at the Missouri DOC, and taught her valuable managerial lessons.

“My philosophy is to surround yourself with people that cover your weaknesses and complement your strengths so that collectively you’re a well-balanced team,” Precythe said.

Even after several decades in the corrections field, Precythe’s belief in the ability for individuals to change continues to drive her work. She also aims to use her new position to help the public better understand the critical role corrections plays in their communities.

“The work we do is so misunderstood; it is the best-kept secret in state government,” she said. “If the average citizen really understood the impact that we have, they would view corrections so differently.”

Precythe applauds the Missouri DOC for developing good correctional policies and programming, but plans to enhance departmental culture by reaching out to staff on all levels — not just those working directly with the offender population. Making connections with administrative and central office staff (those who keep facilities and probation offices operating) is key, Precythe said.

Approximately 97 percent of Missouri prison inmates will eventually return to their communities, and Precythe believes that a large majority is well intended and deserving of the chance to thrive.

“[Those exiting the criminal justice system] have families, they have support, they’re able to keep a job, but I don’t think that’s the type of offender the general public thinks about when they think about the DOC,” Precythe said.

To help find better and more innovative ways of improving corrections and educating the public, Precythe is also a member of the National Institute of Corrections (NIC) Advisory Board, a think tank that includes professionals from across the corrections spectrum. The group examines corrections on the local through national levels, considering best practices, new areas of research and training, opportunities for state assistance, and ways to improve justice and corrections outcomes.

NIC Advisory Board participation and years of on-the-job experience have given Precythe an optimistic view of the future of corrections. Considering emerging research and the success of evidence-based programs, she believes the industry will be very different 10 years from today, and for the better.

To read the full article, check out the May/June 2017 issue of Correctional News.