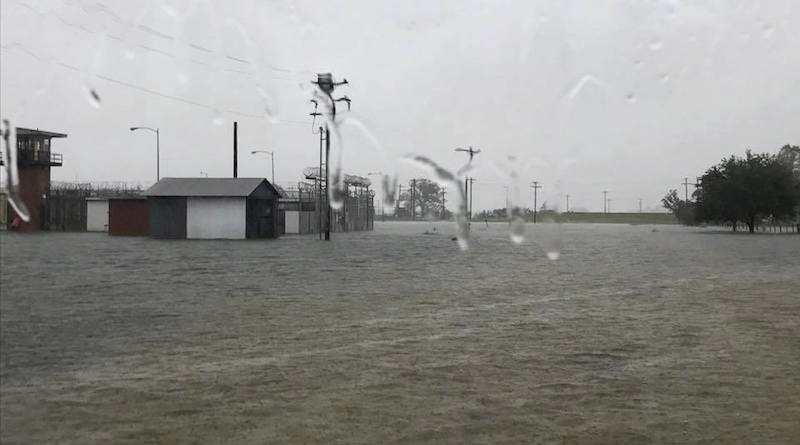 Texas prisons near the Brazos River have been evacuated. Photo Credit: TDCJ

HOUSTON — The historic devastation wrought by Hurricane Harvey throughout Texas has led to the evacuation of five prisons located near the Brazos River.

The previously evacuated Terrell, Stringfellow and Ramsey prisons, all of Brazoria County, we’re joined by two additional prisons late Monday, Aug. 28, as historic flooding in the Houston area continued to see rising water levels. Water was beginning to reach units housing inmates at the Vance and Jester 3 prisons in the Houston suburb of Richmond, which precipitated the emergency decampment. About 1,400 inmates were loaded buses and taken to other prison units in South Texas, according to a Texas Department of Criminal Justice (TDCJ) statement. Inmates from Brazoria county facilities were moved to East Texas prisons Saturday and early Sunday morning. Altogether, nearly 6,000 inmates have been evacuated from the prisons during the flooding.

“We’re doing everything we can to make sure everybody’s safe while the evacuation process is being carried out,” Robert Hurst, a public information officer with the criminal justice department, told the New York Times, when prisoners were evacuated from the Terrell, Stringfellow and Ramsey facilities on Saturday, Aug. 26, a day after Hurricane Harvey made landfall in Texas as a Category 4 hurricane on the previous night.

Inmates are being taken to other prison facilities in Texas that that have available space such as gymnasiums where evacuees sleep on mattresses brought in by the department. Additional water and food is taken to the host facilities to accommodate evacuees.

“Many of the streets in Houston have severe flooding right now, so this evacuation will be logistically challenging,” said TDCJ spokesman Jason Clark to the Texas Tribune.

While away from their respective prisons, inmates will “not be available for visits at the designated receiving units, but will have the ability to use the offender telephone system,” the criminal justice department said in a statement posted on the official TDCJ Facebook page, which added that medical staff is available to provide care to special needs offenders.

The evacuations were spurred by the Brazos River, which rose 15 feet during the flood, according to the National Weather Service. The mouth of the river, which is also known as Rio de los Brazos de Dios (translated as “The River of the Arms of God”) is at the Gulf of Mexico where Hurricane Harvey germinated.

“TDCJ officials continue to monitor the situation and are working with our state partners as Hurricane Harvey makes its way across Texas,” the post stated. An emergency command center in nearby Huntsville was enacted which is operating 24-7.

Family members of inmates may contact the department’s 24-hour hotline to get information on the whereabout of their relatives at 936-437-4927.