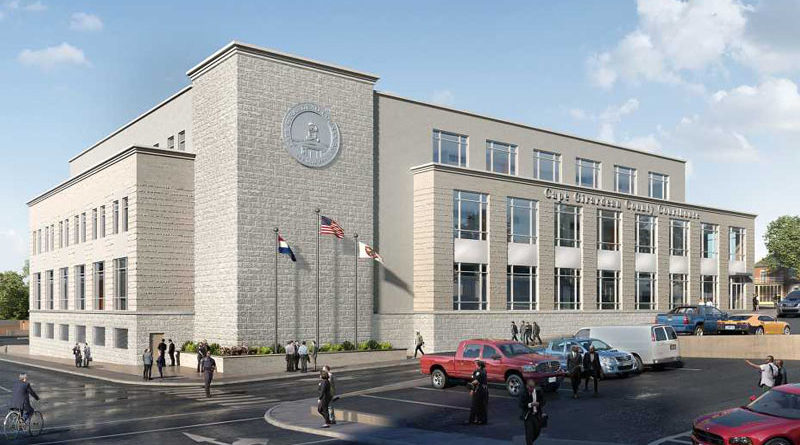 The Cape Girardeau County Justice Center will include a new $20 million courthouse that is set for completion in April of 2020. Photo Credit: Penzel Construction.

The design-build team of Jackson-based Penzel Construction and Treanor HL, an architecture firm with an office in Kansas City, are signed on to design and build the new justice center, respectively.

KFVS 12 reports that Penzel Construction and Treanor HL Architects designed the new facility to look similar to the old Jackson courthouse complete with upgrades that include the latest and greatest technology advancements.

“You don’t get credit for things you start. You get credit for things that you finish,” said Cape Girardeau County Presiding Commissioner Clint Tracy to KFVS 12. “I was just reflecting on the seven years we are basically putting this plan into action. Although we’re not finished we’ve definitely come a great distance.”

The three-story justice center will reportedly be adjacent to the County Sheriff’s Office and will have multiple elevators, six court rooms and more office space.

Dozens of community leaders from Cape and Jackson reportedly held the groundbreaking ceremony for the new courthouse at the corner of North Missouri Street and West Washington Street. Construction will reportedly take about 18 months with a completion date set for April of 2020.

“We are currently operating out of the Common Pleas court in Cape, and then we’ve got the criminal court here in Jackson. So we’ve got judges and the clerks spread between two courthouses,” said Tracy to KFVS 12. “To be able to consolidate. To make our court safer, more accessible for the public it’s going to be a great thing for this community and for this county and so we’re excited to take on such a huge endeavor.”

In August, the Southeast Missourian reported that county officials approved an addition to the justice center project that included a dedicated space for county and state information technology staff.

Penzel Construction and Treanor HL Architects’ proposal for the space reportedly included two additives, as requested by the county commissioners for a room to be added onto the building for the IT department, and to finish out a sixth courtroom, space for which will be included on the center’s third floor.

According to the Southeast Missourian, Associate Commissioner Paul Koeper said the cost for adding the IT component to the building was approximately $229,000, adding, “I would suggest that we do that.”

Koeper reportedly said the discussion around finishing the sixth courtroom was ongoing, and the decision would depend on how the rest of the job goes — whether the room is finished at a later date or with the justice center’s construction.

Posters of the justice center renderings will reportedly be displayed in the County Administration Building lobby and at the Common Pleas Courthouse in Cape Girardeau and the existing Jackson courthouse.

Herbst reportedly said parking lot construction on the north side of the justice center site is underway, and existing lighting will be improved there.

The commission said that they would also reportedly partner with Penzel to put a time-lapse camera on the courthouse, Herbst said to the Southeast Missourian.

Reports from KFVS 12 and the Southeast Missourian contributed to this story.