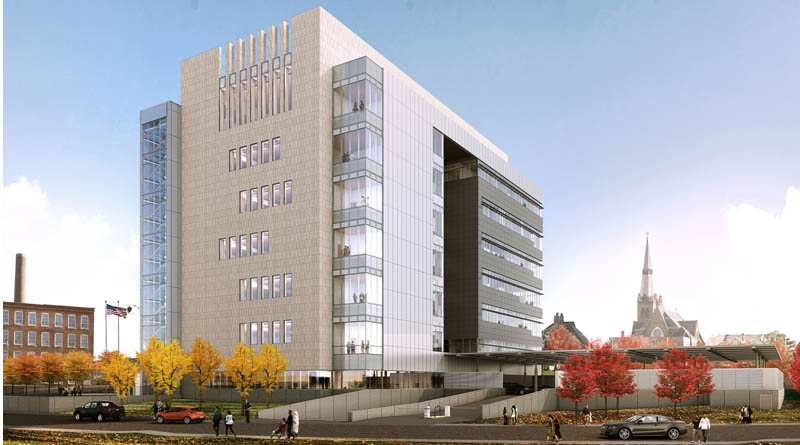 Lowell’s new multi-department courthouse has the potential to be a model for future energy-efficient civic buildings. Photo Credit: Finegold Alexander

LOWELL, Mass. — Lowell’s new multi-department courthouse has the potential to be a model for future energy-efficient civic buildings.

The new Lowell Trial Courthouse will be an energy-efficient courthouse overlooking the historic Hamilton Canal and located at 360 Jackson Street. The cutting-edge facility will be constructed for the superior, district, probate and family, juvenile and housing courts of Middlesex County. A law library, court service center, and office space for the district attorney and registry of deeds will also be provided in the new space. The new building will replace a leased facility and two outdated state-owned courthouses.

A goal in the design of the Lowell Trial Courthouse is to minimize the use of energy drawn from utility grids. The courthouse has been designed to be extremely energy efficient, with an expected LEED Platinum rating, and will feature a chilled beam HVAC system, photovoltaic panels, and sophisticated building systems controls.

Correctional News reported in 2014 that Gov. Deval Patrick approved a $1 million investment in the design and planning of the new energy-efficient Lowell Judicial Center. The existing facility, which is the fifth busiest district court in the state for criminal cases, had been in need of repairs, and current conditions there described as “deplorable,” according to a statement by Rep. David Mangel (D-Lowell).

“This new courthouse will be a modern, cutting-edge, energy-efficient building that will set a new standard for sustainable design and quality of the environment for visitors and staff,” said Rep. Niki Tsongas (D-Lowell), according to Correctional News. “It will serve as a new landmark in the heart of Lowell and a symbol of the city’s reinvention.”

The 265,000-square-foot facility will cost $200 million and will have a total of seven floors, 17 courtrooms and 46 holding cells. Finegold Alexander has been named as the designer and Dimeo Construction has been selected as the project’s contractor. Boston-based P.J. Kennedy &  Sons is providing HVAC services for the project.

The facility will act as the cornerstone for the entry into the Hamilton Canal District and will be the first new building construction for Lowell’s Hamilton Canal District development master plan. An artist has also been commissioned to integrate Lowell historic architecture and diversification as well as judicial influence into the front entry glass curtain wall system.

The Hamilton Canal District development master plan is the largest single project in the Lowell’s Jackson/Appleton/Middlesex (JAM) Urban Revitalization Plan and the city’s comprehensive smart growth planning and redevelopment strategy embodied in the Comprehensive Master Plan, Sustainable Lowell 2025. In addition to the development of the courthouse, the master plan is aimed at reinventing 15 acres of vacant and underutilized waterfront land as a vibrant, mixed-use neighborhood connecting Lowell’s downtown to its commuter rail station.

Until recently, the courthouse was expected to be completed in the fourth quarter of this year. The Associated Press, however, recently reported that “a number of factors” were the reason behind the project’s delays and that the project is now reportedly expected to open in 2020, according to City Manager Eileen Donoghue.

A report from the Associated Press contributed to this story.