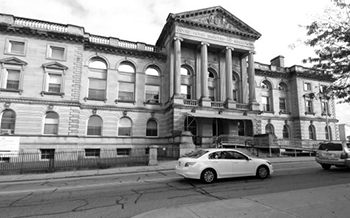 LOWELL, Mass. — Massachusetts Governor Deval Patrick recently approved a $1 million investment in the design and planning of the new energy-efficient Lowell Judicial Center. The existing facility, which is the fifth busiest district court in the state for criminal cases, has long been in need of repairs, and current conditions have been described as “deplorable,” according to a statement by Rep. David Mangel (D-Lowell).

The announcement was welcome news to many local lawmakers who have supported the project in recent years. "This new courthouse will be a modern, cutting-edge, energy-efficient building that will set a new standard for sustainable design and quality of the environment for visitors and staff," said Rep. Niki Tsongas (D-Lowell), in a statement. "It will serve as a new landmark in the heart of Lowell and a symbol of the city’s reinvention."

The new state-of-the-art facility will comprise 245,000 square feet, and include superior, district, housing, juvenile, and probate and family courts across 17 courtrooms. Currently, these five divisions are split between three facilities, and consolidating the system will help the district conserve resources and streamline operations. According to trial court statistics, the court saw nearly 8,000 criminal cases in FY 2012, despite staffing shortages and the lack of modern facilities.

Finegold Alexander + Associates Inc., a Boston-based architecture firm, has been selected to design the new building, which will feature top-of-the-line security systems and technology. Officials are also taking this opportunity to turn the new Lowell Trial Court into a model for energy efficiency. The facility will aim for LEED Platinum certification and is expected to use 50 percent less energy than current codes mandate. Finegold Alexander designers plan to integrate renewable technologies such as photovoltaics, wind turbines and biomass fuel systems that will generate 30 to 50 percent of the building’s energy, making it a candidate for net-zero energy distinction. A net-zero energy task force created by Gov. Patrick in 2008 defined a net-zero energy structure as "one that is optimally efficient and, over the course of a year, generates energy onsite, using clean renewable resources, in a quantity equal to or greater than the total amount of energy consumed onsite," according to Mark Walsh-Cooke PE LEED AP BD+C, principal at Arup, an engineering firm which also contributed to the Lowell Judicial Center feasibility study,

Though progress is now underway, this is not the first time the state has attempted to revamp its outdated and inefficient Lowell facilities. The push for a new judicial building began nearly a decade ago, and the most recent initiative was slated for a 2012 completion. However, budget constraints delayed the project several times. Construction costs for the new green facility have been estimated at $175 million, and officials say construction may begin as early as the spring of 2015. Estimates have put the construction process at 30 months, with an opening date of 2017.

The newly approved Lowell Judicial Center is planned for a vacant site near the Lord Overpass, and will serve as an anchor for the ongoing Hamilton Canal redevelopment project. The land was purchased by the state in 2008 for $3.8 million.