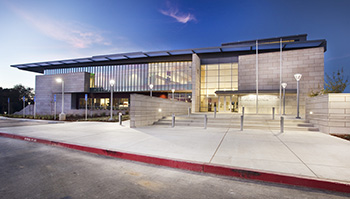 SAN ANDREAS, Calif. — The new, two-story Calaveras County Courthouse opened to the public in San Andreas on Nov. 25. The new courthouse contributes to the California Judicial Council’s goal to improve the court system statewide. McCarthy Building Companies Inc. served as the general contractor and DLR Group served as the architect — both firms have offices in Sacramento, Calif. — while San Francisco-headquartered URS Corporation was the construction manager.
“The goal of the project was to provide Calaveras County with a superior courthouse and really improve their operations and efficiencies because the existing courthouse had operational concerns,” said Matt Wade, project director for McCarthy. “The goals included bringing new technology to the facility, significantly improving energy efficiency and bringing operational efficiencies and security to a higher level. Communication between the various project team members was excellent, and we were able to address changes with minimal impact to the end product.”
Equipped with four courtrooms, the facility now offers all of the court services under one roof and is adjacent to the county’s soon-to-be-completed justice facility. The facility helps to improve the public’s access to justice with a self-help center, a dedicated jury assembly room and improved access to clerk services, as well as ample parking space for court visitors and staff.
Surrounded by oak woodlands, the courthouse features a design that complements the building’s natural setting with a large plaza and two-story glass lobby and great hall. One of the key design elements was to improve security by providing separation of inmates to the public. To meet this goal, the design includes one connection to the new jail currently being built next door.
“Once that jail is completed, then the inmates will be very secure and away from the public,” Wade said. “There is a connecting tunnel that goes from the jail to the courthouse giving inmates direct access to holding cells, to their arraignment and to the courtrooms. The path of that egress is to have more control of the inmates, separate them from the public and from the judges to maximize security efficiency.”
The courthouse was also designed to create an operation that is efficient for the court system. The design team made sure to place the courtrooms, holding cells and corridors in a formation that allows staff to move throughout the facility efficiently.
In terms of green building, one of the biggest goals for the project team was to optimize energy efficiencies and look at efficient equipment to maximize 20 percent of savings above and beyond the [LEED] standards, Wade said. The courthouse features a number of green elements such as a full photovoltaic array system on top of the roof and a green rooftop terrace. It also incorporates low-flow appliances to reduce water consumption. All of these factors qualify the project for LEED Silver certification.
One of the biggest challenges on the project was that the site had a lot of rock, according to Wade. For instance, there was a basement in the tunnel excavation where the project team’s execution plan needed to be dialed in to accommodate the rock and the schedule. Plus, the weather also impacted the schedule. At one point, the project team had to introduce temporary measures, such as shrink-wrapping the entire building.
“It was a big Christmas present,” Wade said. “We had to shrink-wrap the building so that the weather did not affect the construction.”
This project was the first full courthouse that McCarthy’s Northern Pacific Division completed, according to Wade. Although it was one of their first projects where the company mixed judicial and public elements, he said he thinks it’s the nicest building in the county.
“This will be a flagship building in the county,” Wade said. “It stands on a hill and gives the community kind of a facelift with a nice feeling to it.”