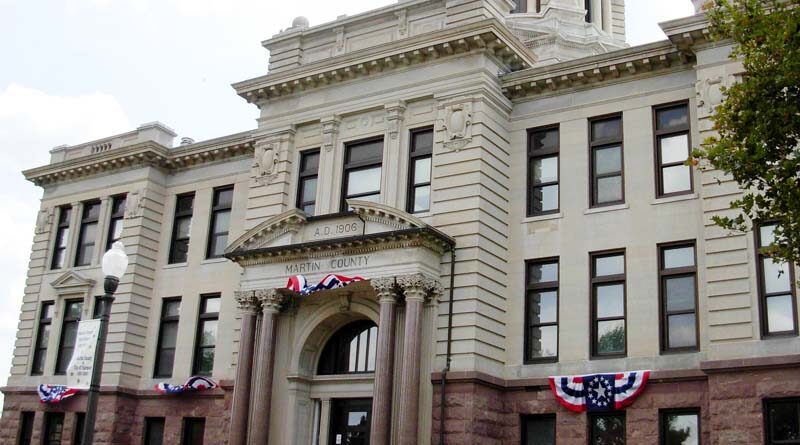 With a completion date set for late spring/early summer 2021, work remains underway on replacing the courthouse’s copper dome and renovating the clock. After more than a century, the copper dome is ragged and leaky after a century of rainfall.

The three-story fireproof and limestone courthouse was built in 1907 for $125,000 and topped with a copper dome that rose nearly 60 feet above the roof. Ringing the dome inside were giant murals with figures representing peace, war, genius, and inspiration. The dome also housed a clock with four faces, all driven by a central mechanism.

“The courthouse is a major thing for them and they should be commended for that,” said Bob Mickelson, a senior project manager at ISG, the Mankato-based architecture and engineering firm overseeing the renovation. “It was leaking bad.”

Damage to the courthouse dome is extensive largely because a protective layer was never placed inside of the dome. This is being rectified with sheathing in the rebuild.

The renovation began in late 2018 with tuck-pointing the building’s stonework, then progressed to the dome. The team viewed historic photographs and took new photos with a drone to get as many details as correct as possible.

Mickelson said the renovation team was surprised when it saw the original blueprints for the courthouse that spanned 12 pages.

“[In] this day and age, we couldn’t even do a preliminary design of a courthouse that size with 12 pages.”

The team is also bringing back four copper eagles that once adorned the dome. Two went missing over the decades, so new birds—with six-foot wing spans—are being created.

The clock—which features four 7-foot faces driven by a central mechanism—is being restored to museum-quality standards by horologist Rory DeMesy of Mechanical Watch Supply in Minneapolis.

“This is kind of almost a once-in-a-lifetime type of deal,” said Mickelson.