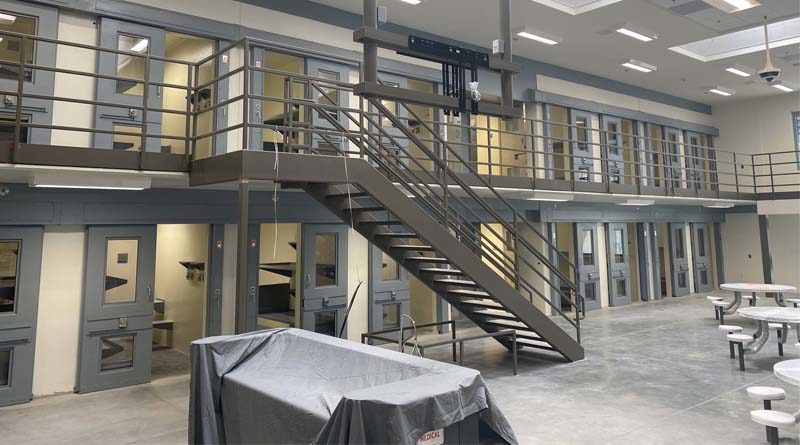 The new facility emphasizes safety and security, while also striving to improve conditions through details like the inclusion of more natural light. Photo Credit: Layton

As the lead in a joint venture with Okland Construction, Layton Construction is fast approaching the finish line on the new Utah State Correctional Facility relocation—the state’s largest, non-highway public project to date. Spanning 300 acres and comprised of more than 30 buildings, the new correctional facility will operate much like a mini city—complete with its own roads, utilities, and several different facilities. Inside the fence, the facilities span approximately 191 improved acres. Considering its size and the many moving pieces, the project has proved to be a massive undertaking, from the design process to managing huge construction crews on a daily basis. Despite these challenges, the Layton | Okland team has seen major successes as they near the project’s end.

Sticking to a Plan

As one might imagine, a project so large with so many components requires extensive coordination. The facility’s 30 buildings include maximum security, four general population buildings, an infirmary, buildings for female inmates, as well as multiple programming spaces and classrooms. Of course, there are also the recreation yards. In addition to the size, the number of laborers on site throughout the project has also added to its complexity. In fact, the project totaled over 450 subcontracts in all.

“The sheer magnitude of the project requires detailed and focused communication. Sometimes, that’s a real challenge with so many people and different personalities,” said Dave Whimpey, Construction Manager for Layton. “Communication has been one of the main keys to success on the project in making sure we’re all on the same page.”

Alongside constant communication and creating a team mentality, a solid logistics plan—and being able to stick to it—was huge. While some things did inevitably change throughout the course, the plan was crucial in maintaining it all. “You have to think beyond just your piece of the project. You have to think, ‘how am I going to impact other teams from achieving their goals?’” says Whimpey. From a project management standpoint, ensuring each team has the ability to succeed has been integral.

Sizing Up for Success

While successes haven’t necessarily come easy on the project, there has been plenty of them. One such success came from the early procurement and involvement of trade partners through design review, which was incredibly beneficial. The advantages have been two-fold in establishing understanding and communication early and, more importantly, having these key trades to provide input on various components.

Another success came from a more surprising aspect of the job: the numerous buildings. Though the overall project is massive, the team took the opportunity to treat each building as its own project in a way—with its own PM and superintendent.

“You have strong, competent people heading up each building who know how to make the right decisions,” says David Burton, Vice President for Layton. “Another benefit to that is we are training a new wave of PMs and supers to run the next Layton projects.”

Of course, you can’t mention a Layton project without talking safety. With a fairly remote jobsite and the nearest medical facilities a good drive away, Layton saw a better way to keep workers safe. “We put a clinic on site. Nothing is close, nothing is handy. Seeing that, we procured a commodity supplier and clinic with on-site staff during the days to manage first-aid cases and any injuries,” says Layton Senior Superintendent Doug Brown.

Perhaps the biggest success, and challenge for that matter, has been creating a space geared toward providing inmates with invaluable resources for their life outside, as well as one within. Though Layton is simply the builder, the team understands the importance of a facility that champions change—while also ensuring the necessary security. This comes down to more programming and industry spaces to learn life skills, as well as an environment that fosters direct supervision. In the eyes of David Burton, the new facility achieves this. He states, “With all the separate buildings, and everything that comes with a facility of that size, the designers have done a great job of addressing what is a big problem across the country.” Another key here was working with Utah Department of Corrections’ Deputy Director Steve Turley, who led the end-user team on the jobsite.

Built for a Brighter Future

Ultimately, the new Utah State Correctional Facility serves as a major improvement from the existing. Though the transfer of inmates will be a slow process once open, it will provide a better environment for both inmates and staff. From natural lighting and open views to glass partitions and more fluid movement within, the facility is solid and sound from both a security and humane standpoint. All in all, the new correctional facility should be a win-win for all.

Editor’s Note: An exclusive report from Layton Construction contributed to this article, which originally appeared in the July/August issue of Correctional News.