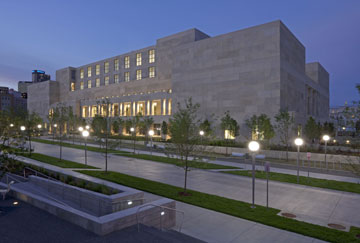 Facility Name: Facility Type: Van Cise-Simonet Detention Center
Construction Budget: $159 Million
Number of Beds: 1,472 Beds +24 Beds in Medical
Area (square feet): 438,400
Energy Conservation: LEED Silver – awaiting final certification
Start Date: February 21, 2007
Completion Date: March 2010
With its goal being to address inmate overcrowding, provide a safer and more efficient eco-friendly structure, and to construct a detention facility that doesn’t detract from mountain views, the Denver Sheriff Department has succeeded on all counts.
The new $159 million Van Cise-Simonet Detention Center opened in April — on time and on budget — and marks the completion of the second of five phases of the Denver Justice Center campus project that voters approved in 2005. The five-story jail is just one of several buildings within the $290-million multi-faceted project that includes a new post office with attached garage, improvements to the county jail, and a courthouse with 23 courtrooms and plaza. The detention center houses central booking for the City and County of Denver; a DUI intake center for the Denver Police Department, and two arraignment courtrooms to expedite the processing of new arrestees. A medical infirmary provides treatment and long-term stay care and minimizes the need to send inmates off-site for medical treatment.
“The new Denver jail embodies the philosophies that we promote as a firm,” says April Pottorff, associate principal with Ricci Greene Associates, based in New York City, which worked on the project with architect of record OZ Architecture, based in Denver, and design architect Hartman-Cox Architects, based in Washington, D.C. Functional and space programming and concept design began in March 2006.
With a goal of providing the least restrictive environment appropriate for each inmate, the design solution reflects the sheriff department’s commitment to provide an environment that maintains the humanity and dignity of detainees, Pottorff says. 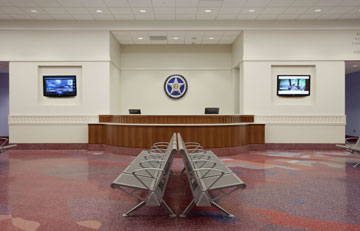 “It’s about how these facilities can have a positive impact on the community,” she says. “That’s the difference between jails and prisons. Jails are civic buildings and part of the civic structure of the justice system in the community. It’s exciting to see jurisdictions become more open, creative and forward-thinking about what these facilities can be.”
The Van Cise-Simonet Detention Center was named after Philip Van Cise, who served as Denver’s district attorney from 1921 to 1925, and John L. Simonet, director of corrections and undersheriff from 1981 to 1983, and again from 1985 to 2000. Van Cise successfully prosecuted the Ku Klux Klan and the Blonger gang during his time as DA, while Simonet strongly believed in giving inmates skills to succeed after they had served their jail time.
Located in downtown Denver, the new detention facility and justice center plaza – which span two city blocks – form a link between the emerging mixed-use neighborhood to the south called the Golden Triangle neighborhood, and the central business district to the north. The project was subject to continual public scrutiny and had to meet certain conditions agreed upon with the Community Advisory Committee to create a good neighbor. These included being a sealed building, a limit on building heights, and off-loading inmates out of sight of the general public.
Safety Enhanced
Prior to the building of the new facility, sheriff’s office division chief Marie Kielar said victims and families, witnesses and jurors were confronted by shackled and manacled inmates on their way to court. The detention center and courthouse are now attached by a tunnel, enabling a safe and secure method of getting inmates to court.
“This is safer for the community because with the design of the new courthouse, inmates will no longer walk along the hallways with the public in general,” Kielar says.
The new facility was constructed from Indiana limestone and meshes well with the current structures. It was also 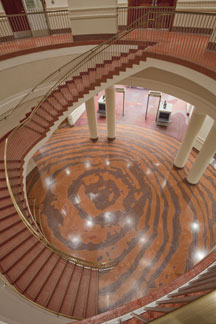 designed to ensure that views of the Rockies were preserved.
Construction began with demolition in late 2006, which was managed by Hensel Phelps. As construction manager, the company provided preconstruction services and worked with the design team to evaluate costs and advise on systems, materials and construction sequencing. The courthouse portion of the project opened on July 6 while the detention center, which replaces the old pre-arraignment detention facility, opened April 23 with a capacity to hold 1,472 pre-sentenced inmates and 24 medical beds. Since April, the average daily population has been 1,280 inmates. All levels of adult male inmates are held here and only pre-arraigned females.
The detention center hosts a range of direct-supervision housing types: open dormitories, eight-bed dorms, double bunk-celled units, and single-celled units. With an abundance of natural lighting and state-of-the art technology, Kielar says safety and efficiency has been greatly enhanced for both officers and inmates.
“Deputies have the ability to control doors from a PDA [handheld device] giving them the flexibility to move around the housing unit,” says Kielar. “The new center is designed to be a direct supervision inmate management model, giving the officers more flexibility and control of their area of responsibility. The inmates are better behaved and more easily managed with the new efficiencies.”
Inmate services are decentralized so programs, meals, recreation and visitation are provided at the housing units, she explained. Each housing floor has its own medical exam room and numerous interview rooms along with supervisors assigned to each floor 24/7.
“We also have staff amenities in the new detention center, allowing the staff to exercise and change clothing in the facility,” added Kielar. “And the center now has a full medical infirmary, providing x-rays, dental care and medical beds.”
Tight Site Challenges
The site presented a tremendous opportunity to the design team for creating a modern, downtown, high-rise jail with a strong civic presence. The biggest challenge was accommodating the 440,000-square-foot center on the designated site.
The building also had a height restriction to ensure an unobstructed view of the mountains from the Capital building steps. The new jail is approximately 95.5 feet in height and within inches of the required height limitation. 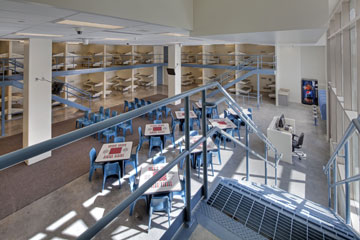 While building an urban jail and ensuring it flows with adjacent buildings is unique enough, this project went several steps further in that the City of Denver included the community in the decision-making process, bond initiative and design of the campus.
“The city dealt with the criminal justice system as a whole when deciding on the needs for a new justice center,” says Kielar. “We improved the infrastructure of the city streets and sewage, built a parking structure, new detention center and a new court house. The final phase is renovations at the Denver County Jail. We will be tearing down the old dilapidated buildings and building the first phase of the Denver sheriff department building.”
Striving for LEED Silver
With a strong focus on eco-friendly features, the center has achieved the requirements for LEED Silver certification. Some of the Green features include easy access by public transportation, cyclists and pedestrians; light-colored roofing material to reduce the heat island effect; landscaping comprised of native and/or adapted plant species; and a 20- percent decrease in water usage by utilizing efficient fixtures. Additionally, at least 50 percent of construction waste was diverted from the landfill.
“The existing Rocky Mountain News building that previously occupied the site of the jail was deconstructed instead of demolished and the majority of the nonhazardous materials were reused or recycled,” says Pottorff.
There was also a considerable amount of recycled materials used in the form of steel and flyash, carpet, insulation, tile and more, she says. The jail used recycled content materials for 28 percent of the total cost of material used on the project and also incorporated Forest Stewardship Council-certified wood for more that 50 percent of the new wood used.
An unexpected artwork feature became a reality thanks to Denver’s “One Percent for the Arts” program. The public art program requires capital improvement projects totaling more than $1 million to dedicate one percent of its funding for public art. Garrison Roots, a professor at the University of Colorado-Boulder, created an epoxy resin terrazzo art floor for the public lobby in the building. Titled Acumen, it features images from nature that are rich in color and provide a sense of peace for the lobby of the building.
Project Team
Project: Denver Justice Center Detention Center, Denver, Colo.
Owner: City and County of Denver
User: Denver Sheriff Dept.
Owner Representative: Jacobs Facilities, Inc.
Design Architect: Hartman-Cox Associates
Architect of Record: OZ Architecture
Detention Design Architect and Jail Planning: Ricci Greene Associates
Jail Planning: Voorhis/Robertson Justice Services
Construction Manager at Risk: Hensel Phelps Construction Co.
Security Electronics and Detention Equipment Contractor:
Sierra Detention Systems
Acoustical: David L. Adams Associates, Inc.
Mechanical: M-E Engineers, Inc.
Electrical: Sorcar Engineering, Inc.
LEED/Sustainability/Energy Modeling: Ambient Energy, Inc.