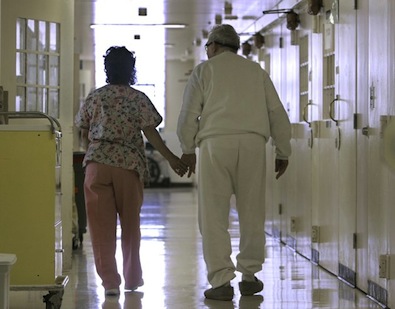 BOSTON — Prison is a place designed to keep law-breaking citizens behind bars, but Massachusetts Gov. Deval Patrick wants to build special facilities for elderly offenders to serve their final years away from the general population.

According to the state’s 400-page Corrections Master Plan, which was recently shown to sheriffs, eligible inmates for two to three assisted living centers for senior inmates would include those “typically not suitable to be housed in the general population due to their vulnerability and the disproportionate consumption of staff resources they require.”

By 2020, 27,000 inmates will be in county houses of correction and state prisons, according to the report, and 900 of them “on any given day would be expected to have medical needs serious enough to be provided a separate living environment.”

Between 1995 and 2010, the number of state and federal prisoners age 55 or older nearly quadrupled. There are currently 124,400 prisoners ages 55 and older, according to the Human Rights Watch.

“If they’re suggesting they should have a locked, secure ward for people who are in the last six months or year of their lives for dialysis or a cancer situation … I don’t have a problem with that,” said Essex Sheriff Frank Cousins.

But the proposal is not sitting well with many law enforcement officials, including Bristol Sheriff Thomas Hodgson.

Hodgson said he’d rather see Patrick invest in programs to deter people from incarceration, rather than entice aging career criminals or otherwise hard-luck residents into crime with the alluring prospect of a comfortable retirement home and medical care.

“There’s no question that the population in the prisons is aging, but prison is prison,” he said.

Other sheriffs, however, believe such facilities might be necessary due to the number of inmates in the system and the cost of housing them.

“It seems to be a good first step in a discussion on where corrections is going,” said Middlesex Sheriff Peter Koutoujian. “The percentage of chronically ill inmates is rising and is a budget-buster. We have an aging prison population. Finding efficiencies in the delivery of health care may be the way to go.”

The idea of building a “retirement home” within a prison is not new. At the Coyote Ridge Correction Center in Connell, Wash., senior inmates’ facilities include shuffleboard, a walker and wheelchair-accessible amenities, and even companion dogs.

Iowa is also looking at alternative methods to house its elderly inmates and may establish a special nursing home for elderly sex offenders and other criminals.

State Rep. Tom Shaw said the state government might buy a small nursing home and staff it with personnel trained to deal with sex offenders.

The master plan proposed in Massachusetts, including the senior facilities, would require $2 billion in capital improvements and $120 million more in annual operating costs to meet current demands. The debate over whether the improvements are necessary is ongoing.

“We cannot build our way out of this problem,” said Secretary of Public Safety Mary Beth Heffernan. “We need to have a better common sense operating approach to who we put in our beds.”

Prison beds, she said, should be reserved for “habitual offenders, bad guys and felons.”