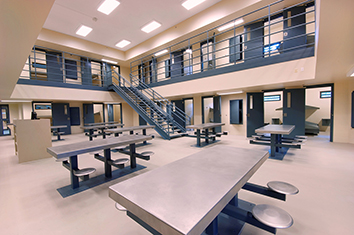 BEL AIR, Md. — The Harford County Jail in Bel Air underwent a $32 million expansion four years ago, but one specific problem is keeping the jail from operating at its full capacity: Staffing. The Baltimore Sun reported on Nov. 27 that Harford County Sheriff Jeffrey Gahler has requested hiring an addition 36 new correctional officers to help put the currently unused expansion on line.

Although the Harford County Jail has been recognized as one of the state’s top detention facilities, sections remain unused as they cannot be properly operated and supervised by current staffing levels. It was initially opened in 1973 and received an expansion in the late 1990s. The most recent expansion added 288 beds, bringing the jail’s total capacity to 824. The expansion was initially intended to ease once-serious overcrowding, which was especially problematic over weekends.
Crabtree, Rohrbaugh & Associates of Baltimore provided design services for the 76,000-square-foot addition and 14,000-square-foot renovation to the county’s existing detention center in 2011. The new four-story space allowed for additional medium- and maximum-security beds and also included a medical and dental suite. An additional one-story building also designed by Crabtree, Rohrbaugh & Associates houses classification offices, a booking area, visitation, storage, expanded administrative areas, a laundry facility and the District Court Commissioner’s hearing rooms.
The new wing eventually became home to the jail’s juvenile inmates and medical staff, who also used the area to place inmates in medical isolation when necessary. Initial plans made by the previous sheriff included using the wing for mental health counseling and substance abuse treatment as older parts of the facility were renovated. While many modern jails feature a design that brings educational and rehabilitative programming into the inmate living space, in the older sections of the Harford County Jail staff must still escort inmates to more secure areas to participate in such activities. Regardless, Gahler told the Baltimore Sun that the expansion currently cannot be used for permanent inmate housing and rehabilitation programs unless additional correctional staff are hired.

Currently, the jail employs 140 of the county’s nearly 600 full- and part-time employees. Gahler hopes to work his requested 36 new hires into the jail’s 2017 budget. The additional staff would provide coverage for six additional posts within the jail, according to the Baltimore Sun.

Gahler has plead his case to local legislators in hopes of receiving state funding for staffing and additional improvements during the general assembly’s upcoming session. Speaking to county legislators last month, Gahler urged them to participate in a site visit to better understand the older jail’s deficiencies such as its outdated linear design and lack of secure areas for inmate programs.

Should Sheriff Gahler’s request get the green light, it will likely cost the county $3.3 million in salary, benefits and pensions, as well as costs related to training and outfitting the 36 new hires.

"[County officials] understand the issue, they understand the problem, so it’s just a matter of whether they have the ability this year, financially, to help us," Sheriff Gahler told the Baltimore Sun.