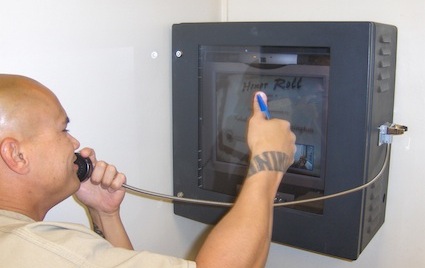 Reading a book to a child is an effective way of encouraging prison inmates to behave behind bars.
That may sound idealistic or even naïve, but that is exactly what is happening at Saguaro Correctional Center in Eloy, Ariz.
Read to Me International Foundation, a Hawaii-based nonprofit dedicated to child literacy, implemented a version of its reading program at Saguaro — where many inmates from Hawaii are housed — called Fathers Bridging the Miles, in which inmates get to read a book while being recorded onto a DVD disk, and the recording is then sent to the child. Participating inmates are also allowed extra on-site or video visits with their child.
The group implemented the program in partnership with the Hawaii Department of Public Safety and Corrections Corporation of America.
“When faced with the decision [to engage in prohibited behavior], they’re thinking about their children and they make the right decision,” Saguaro’s Warden Todd Thomas said of prisoners in the reading program. As such, the program has been recognized as a top strategy for reducing misbehavior among the facility’s inmates.
“I’ve seen some pretty hardened guys and I’ve asked them, ‘what benefit do you get from the program?’” said Thomas. “And one guy said to me, ‘I haven’t spoken to my son in five years. This gives me something to talk about, something we have in common. He looks forward to talking to me, and I look forward to talking to him.’ Another said, ‘I’m older now; I want to spend quality time with my family. I’ve never spent quality time with them before.’
“The fact that it helps to reestablish an inmate’s connection to his family is also a factor in their improved behavior,” said Thomas. “It puts them back in touch with a stable home environment. That’s why it’s so strong and powerful.”
Saguaro opened its doors for occupation in July 2007 and Read To Me International’s program was implemented in November of that year. Inmates who apply for acceptance into the program are screened to verify that they have minor children and approval is obtained from the custodial parent before they are given the go-ahead to participate.

Accepted inmates are subsequently provided with a list of age-appropriate books from which they are allowed to select the ones they would like to read to their child. They are then recorded reading the book and the recording, along with a copy of the book, is sent to the child.

Bilingual English-native Hawaiian books are included on the reading lists and, because music is so important in native Hawaiian culture, Read To Me International also provides participants with a ukelele so that they can sing songs to their child on the recording or during a video conference, said Liane Akana, executive director of the organization.
Each participant is allowed to read two books per child per month to an unlimited number of his children for the first year of the program, which coincides with a 12-month parenting class. Once they have completed the class, participants are allowed to read one book per month per child, and they can remain in the program for as long as they like.
The program includes literacy tutoring. If a participant struggles with reading, volunteers will work with him before recording the book. “Once they get inside the program, they might struggle to read,” said Thomas. “One month later, they look as good as you or I. They work so hard.”
Volunteers conduct classes on a weekly basis for two to four hours, and 15 to 20 inmates participate in the program at any one time.
Inmates also participate in a one-year parenting class, where they discuss various parenting issues, such as how to effectively talk to teens and how to get along with the mother of their children.
Volunteers test the participants’ parenting skills before they begin the program and after they leave to determine what they have learned in the parenting class, and the results, says Akana, show that two-thirds of them experience gains in learning.
“Men think differently about their role as a parent after the class. Before [the class] they are intimidated by parenting from prison,” she said.
“We think the parenting class is as important as the mentoring class,” continued Akana. “Video conferencing gives them the opportunity to practice everything they are learning in the parenting class.”
Read to Me International first began working in Hawaii’s prisons in 2003, piloting its program in a women’s facility. The pilot was so successful that the state invited the organization into additional facilities.
In 2006, Akana came across a federal RFP offering grants to promote fatherhood among prisoners.
“It was a little bit of a stretch because it required we provide parenthood education,” said Akana. “But we found we could still work within our mission and develop a curriculum specifically to develop child learning. It ended up being workable for our organization and for the grantors at the federal government.”
Read To Me International wrote its grant application specifically for Saguaro Correctional Center because Hawaii contracts with the CCA-owned facility to house its inmates there.
The organization is currently seeking federal grant funding to expand its services in the prison to include the entire family.
The program has been a runaway success with Saguaro’s staff. “I would recommend this program to any department across the U.S.,” said Thomas. “If we lose funding I would look for how we can maintain it in my facility. It’s such a simple program, but it works so well.”
Thomas credits the program’s success to the enthusiasm and dedication of its volunteers.
“It’s raw energy. They make [the inmates] have fun. They break barriers, they reassure them,” said Thomas of the volunteers. “They see a guy struggle, they don’t correct him. They pull them to the side and spend another two hours with them. They love to see the guys succeed. I would love to employee all of them.”
Saguaro’s program currently has three volunteers: Pat Mizuno, who acts as the program’s facilitator as well as a reading teacher; Chuck Schofield, who also teaches reading and conducts the parenting class; and Janet Decherd, who takes care of the screening process and other logistical needs.
In August, they organized a ceremony for over 200 of its past and present participants who were still at the facility, presenting them with a certificate of completion and cake and cookies. Former Hawaii Governor John Waihee was on hand to deliver an inspirational speech.
“It meant a lot to them,” said Thomas.
Akana reported another benefit of the program: Because participants are taught to be involved in their child’s learning and schooling, the children of participants have improved in their studies, she said. “There has been a significant amount of improvement in child performance in school. If they know their father is interested, they will want to do well.”