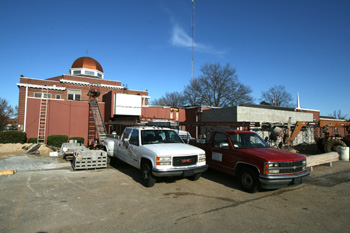 The state fire marshal forced the jail to close when a 2009 review by the 9th West Criminal Detention Facilities Review Committee deemed the Ashdown, Ark. correctional facility, “a potential lawsuit waiting to happen.”

Since its closure on Jan. 1, 2010, the county has been transporting inmates to neighboring Miller, Sevier, Howard, Hempstead and Sebastian counties as well as Bowie County, Texas. This costly process has been a financial and operational burden to the county for too long, county officials said.

“I think that with this refurbishing and updating everything, it’s going to be a very positive financial move for the county and citizens,” said Sheriff Gary Gregory.

The 26-bed jail, which was funded by Little River County emergency funds, will hold pre-trial inmates and acquire an estimated cost savings of $125,000 annually. The jail will also bring seven new jobs to the local community. Additionally, food and laundry services will be provided by the local Little River Memorial Hospital and nursing home.

The refurbished 4,000-square-foot jail will include a new roof, plumbing, inmate cells and outdoor exercise area.

Renovation of the facility, headed by SpiritArchitecture Group LLC, began in December but was initially scheduled to start in August.

“It’s a financial issue,” said Mark Hammer, project manager with SpiritArchitecture Group. “Counties are trying to delay construction projects as long as they can.”

Voters of Little River County have struck down a sales tax to construct a new jail twice since the jail’s closing.

Even with the renovation, County Judge Clayton Castleman continues to push for a new jail that he believes is greatly needed.

“When the voters decide they want a new jail, a larger jail, we can take this facility and convert it into a juvenile unit,” Castleman said.

Hammer said it was much more difficult to renovate the existing 12-bed jail, built in 1976, than to construct a new jail. The aging facility had certain limitations such as a lower roof deck and less room for ductwork and sprinklers, Hammer said.

“You never know what you’re going to find until you tear some stuff up,” Hammer said.

The key to this manner of project, he said, is to know the right person to talk to in any given circumstance.

“The more information the county can provide up front, the better off you are,” he said.

Though there were many helpful hands, issues such as electrical service concerns were not foreseen prior to renovation

“We got a good bid and their maintenance staff knew a lot about the building, which was helpful,” Hammer said. “We still found things we didn’t know about.”

Hammer said that SpiritArchitecture has a contract with the county to do a new jail if tax measures to fund the project are approved in the future, though he remains unsure if taxpayers find a new jail economically feasible.

“In today’s economy, who knows? They still have a need,” Hammer said. “This is a stop-gap measure but they can use it for a long time.”