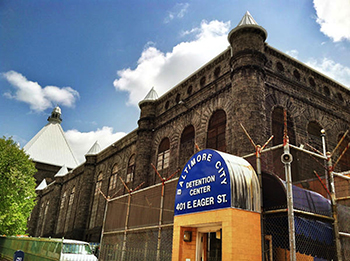 Gov. George O’Malley unveiled the new “managed access” system at a press conference in the Baltimore City Detention Center (BCDC) in early February. “For the last seven years, our administration has worked to put Maryland on the front lines of the national fight against contraband cell phones,” O’Malley said in a statement. “This technology arms our dedicated correctional staff with additional tools they need to crack down on cell phones in our facilities, protect integrity and ensure the safety and security of our correctional system.”

This new $5.4 million system, created by Tecore Networks of Columbia, Md., has now been installed in two state detention centers, and will help prevent inmates from conducting illegal activities from inside state facilities. It is specifically designed to intercept calls before they reach the network, and cross check the number to assure it has been authorized. At that point, the system either halts unregistered calls or allows approved numbers and 911 calls to advance. It also prevents unauthorized mobile data, photos and text messages from clearing the network.

At the press conference, Gov. O’Malley said that correctional officials are using the managed access system not just to improve prison security, but also security throughout the state itself. “These are pretty deadly instruments for gangs to use to intimidate witnesses on the outside, to order hits on rival gangs,” O’Malley said.

In 2013, 44 inmates and correctional staffers at the BCDC were indicted after an investigation uncovered they had conspired to manage the Black Guerilla Family (BGF) gang from within the prison. According to the indictment the gang leader had used the illicit cell phones to monitor outside gang activities, alert fellow members to searches and even transfer payments from within prison walls. Those involved have also since pled guilty to crimes such as extortion, possession with intent to distribute drugs, money laundering and criminal forfeiture.

Though the system was implemented on Dec. 30, 2013, officials delayed the official announcement until the system had been fully monitored and any technical issues had been addressed. Tecore Networks officials and correctional staff have also spent weeks combing the facility for areas in which cell phone calls might still be able to slip through, and have tapered the system to prevent it from denying calls originating outside the facility.

To support the new managed access technology, the state is also utilizing specially trained K-9 units to sniff out illicit cell phones, and has invested roughly $1.1 million in improved visitor screening. Should any persistent visitor or inmate succeed in bypassing these preliminary defenses, the user would now hear the recording, “The cellular device you are attempting to use has been identified as contraband and is illegal to possess under the Maryland statute 9-417,” upon any attempt to use the device.