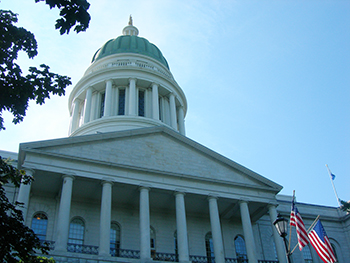 After the Feb. 28 announcement, Rachel Talbot Ross, president of the NAACP (National Association for the Advancement of Colored People) of Portland, a co-author of the letter, called the move a significant step toward ensuring the quality and standards of prisoner health care. "It was powerful to hear members of the committee articulate genuine concern for the well-being of Maine’s most vulnerable,” Ross said.
Along with the NAACP of Portland, the Maine Prisoner Advocacy Coalition (MPAC), ACLU of Maine, and the Maine Council of Churches also urged committee members to improve health care delivery. Though a prison health care review was just conducted in 2011, the groups highlighted several on-going health care concerns. Among them, the groups claim medical information is often inaccurately recorded in state facilities, and that inmates regularly experience untimely delivery of care and barriers to accessing medication.

"Health care in the correctional setting is extremely vulnerable to cost-cutting measures, and prisoners have few avenues to speak up for themselves if they aren’t receiving adequate care,” said Grainne Dunne, justice organizer at the ACLU of Maine. “When it comes to prison health care, oversight is essential. We applaud the Oversight Committee for taking swift action to address the real and serious concerns that exist over the quality and availability of medical care in Maine’s prisons, before it’s too late."
"MPAC members, inside and outside of Maine’s prisons, have long recognized the need for objective scrutiny of our prisoners’ healthcare," added Steve Lewicki, MPAC coordinator. "We commend the Oversight Committee for recognizing the urgency of this matter.”
MPAC alone received 400 letters concerning “serious, unresolved medical issues” between July 2012 and October 2013, despite improvements following the 2011 OPEGA report. According to a release by the ACLU, that report prompted the state to end its relationship with private correctional health care company Corizon and instead contract with Correct Care Solutions (CCS). Though CCS had agreed to increased transparency and dialog with advocacy groups, several health care concerns remain unaddressed.

The letter also included several health care delivery issues not in the 2011 report. These included the inaccurate transfer of medical records and information between facilities, and complaints concerning unanswered medical grievances. Unmet dietary needs, denial of pain medication, inadequate accommodations for elderly inmates and those with disabilities, difficulties obtaining dental and mental health services, and the dismissal of outside specialists’ recommendations were also mentioned.

Though the group also stated they did not expect a complete cure to all prison health care deficiencies, they also urged the committee to adopt a policy of regular and in-depth examinations of the current correctional health care system. The Oversight Committee will follow up on this issue at its March 28 meeting.

The letter to the Government Oversight Committee which includes a catalog of all serious medical complaints received by MPAC since 2012, can be viewed in its entirety at: www.aclumaine.org/media/785.