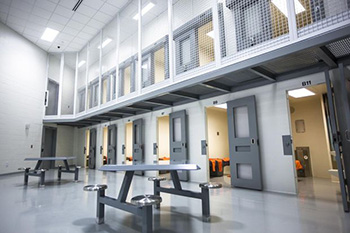 ALLEGAN, Mich. — The new $20 million Allegan County Sheriff’s Office and Corrections Center debuted to the public on Saturday. The correctional officers, followed by the inmates, will move into the 193,300-square-foot facility in the next few months.

The current jail facility was built in 1961 to house 62 inmates and was renovated several times to its current capacity size of 173 inmates. However, frequent overcrowding continued to make it unsafe for inmates and correctional officers.

Discussions about the project started in 2007 when the Allegan County Board of Commissioners decided to build a jail and sheriff’s facility at Dumont Lake in Allegan Township for $25 million. In 2008, office furniture maker Haworth Inc. closed a local, 22-acre plant, which was available for purchase with municipal sewer, water and electrical hookups. The board decided to repurpose the old factory instead of build from scratch, saving the county $14 million, reported the Holland Sentinel.

The purchase was made in December 2009 and a groundbreaking ceremony for the new facility was held in March 2012. Three firms completed architectural and engineering services for the project: Indianapolis-based RQAW, Byce & Associates of Kalamazoo and OCBA Inc. of Kalamazoo.

Capt. Frank Baker told MLive that the new facility provides several efficiencies, such as the ability to do arraignments and other district court hearings from the jail by video as well as having a larger receiving garage for deputies transporting inmates. The ability to do hearings by video cuts down on the amount of transportation of inmates outside of the jail to the county courthouse. It also makes the whole process a lot safer and prevents deputies from having to move inmates on foot outside of the building, which sometimes happens in the current facility. The building’s new receiving area, where prisoners will be booked into the jail, houses 12 individual cells for inmates to go through alcohol or drug detox before they are housed in a pod at the jail, which will also make the jail safer.

The new facility, which will hold up to 325 inmates in eight different pods and three areas for prisoners who take part in work release, will allow corrections officers to classify inmates by gender, age or whether they are violent or non-violent offenders, among other classifications. There is also a large control center overlooking the eight inmate pods in the jail, which will allow up to two officers to keep an eye on the pods and control the building’s about 200 doors.

The new building also has space for the sheriff’s office to house all of its evidence in one place, as well as all of its equipment, as opposed to the three different county locations they were previously using as storage. There are also future plans to install Telmate, a new technology that allows inmates to speak with visitors via video from a kiosk within their pod.

The opening of the new jail was filmed by Plainwell High School’s advanced TV production students, which conducted interviews and shot hours of raw video footage for the short video aired at the jail’s open house. In addition to the video tour, the class has footage to complete three 10-minute documentaries on the Old Jail Museum, current jail and the new jail.